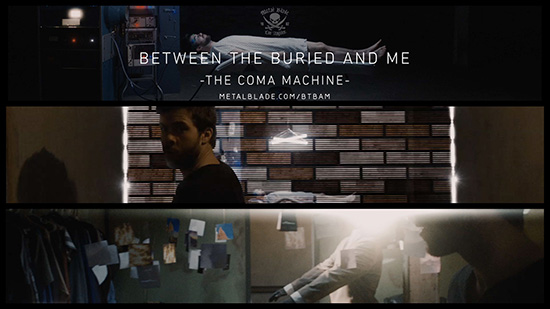 Progressive metal band BETWEEN THE BURIED AND ME have premiered a music video for “The Coma Machine” today! “The Coma Machine” is the second single off of the band’s upcoming, highly anticipated album, “Coma Ecliptic“! Fans can watch the video now here: metalblade.com/btbam!

About the music video, vocalist Tommy Rogers shared, “This video is special to me because it looks beyond the story that is on the record. It showcases the character preparing for his journey and is him basically saying bye to his old demons/life. This footage adds dialogue to the story and I think that is very unique. Wes and crew did a wonderful job creating a world that works well with the song and uniquely showcases the depth of this unstable character.”

“Coma Ecliptic” is available for pre-order with special bundles and packages offered, including: CD, LP, exclusive t-shirts, an exclusive hour long behind the scenes making-of DVD. Fans can listen to the first single, “Memory Palace,” as well as pre-order the upcoming album by heading tometalblade.com/btbam.

The band has also confirmed a full European headline tour for the fall! The tour will kick off in Southampton in the UK on the 22nd of September and will bring the band to ten countries in total. Support comes from Haken.

BETWEEN THE BURIED AND ME at Temples, Bristol May 29th-31st

“Coma Ecliptic” was recorded in January and February of 2015 with BETWEEN THE BURIED AND ME producer Jamie King at Basement Recordings in North Carolina. Drums and piano were recorded with King and Kris Hilbert at the Fidelitorium. Final mixing and mastering was placed in the capable hands of Jens Bogren (Opeth, Katatonia, Amon Amarth, Devin Townsend) at Fascination Street Studios in Sweden.