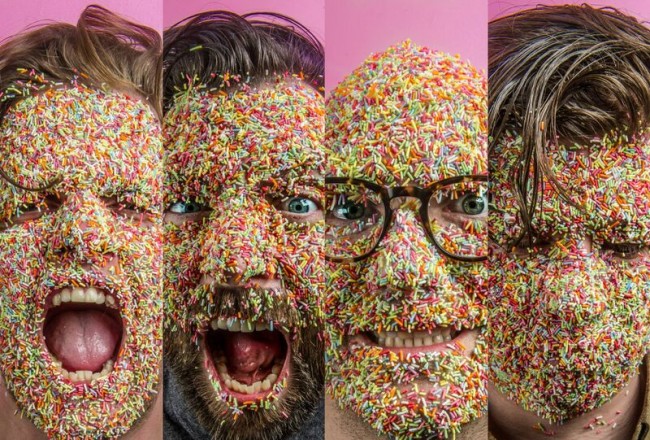 Never ones to shy away from making a dark and surreal music video, noise-rock quartet Blacklisters continue to push those boundaries a little more with their new video for ‘Shirts’, created by Pulled Apart By Horses members Tommy Davidson and Tom Hudson (Snake Arrows). Frontman Billy Mason-Wood states:

‘This song, Shirts, is a song about shirts, about wearing them, about needing them, about loving them. I didn’t wear a shirt once and this is what my world looked like. Always wear at least one shirt.’

Blacklisters are Billy Mason Wood (vocals), Dan Beesley (guitar), Owen Griffiths (bass) and Alistair Stobbart (drums). The Leeds band have earned a reputation as a formidable live act through aggressive, confrontational performances riddled with dark humour, drawing comparisons to The Jesus Lizard and Pissed Jeans. Over the past few years, the Leeds quartet have deservedly earned their reputation as one of the UK’s most confrontational and aggressive live acts.

Adult, their forthcoming second album was recorded at Suburban Home Studios in Leeds with producer Matt Johnson, aka MJ of Hookworms. The album is a clear progression for the band, and demonstrates a growing confidence in their song writing and performance, from the abstract art-noise to the unrelenting, brutally minimalist riffs that first put them on the radar.

Adult, will be released on 18th September via Smalltown America (home of Jetplane Landing, USA Nails, Axis Of, Carnivores…) this Autumn on all formats including special edition vinyl. Pre-order from 24th July.

Their debut album BLKLSTRS was released in 2012, on the now defunct underground label Brew Records, to critical acclaim. Significantly, it saw fellow musicians, from Biffy Clyro to Pig Destroyer, lauding Blacklisters in the press and on radio. Blacklisters have since headlined tours in the UK and Europe, been invited to support the likes of Scratch Acid, Pig Destroyer, Future of the Left and Big Business, and recorded a live session at Maida Vale studios for the Radio 1 Rock Show. The band are set to tour the UK later this year and have announced the following run of shows with more to follow: