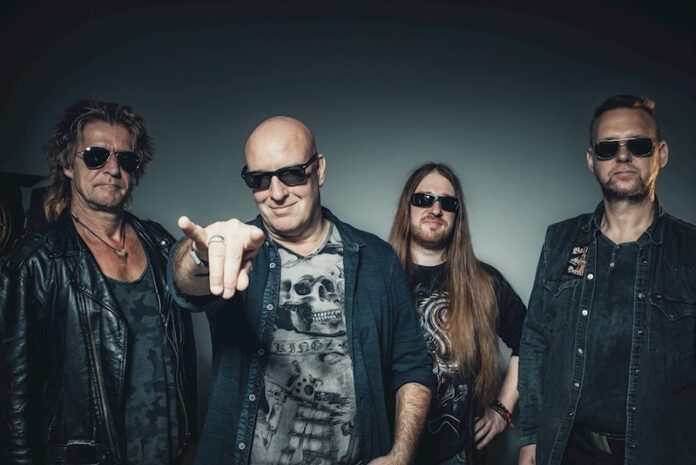 German power metal act IRON SAVIOR has released another jewel and a blast of the past, a re-recorded version of “The Battle”! The song was originally issued on the band’s second, 1999- studio album Unification.

The Hamburg-based metal veterans seem to be gearing up for a new album, entitled “Reforged II – Ironbound”, which will be coming out during 2022 with AFM Records. Earlier in March, they have already shared a new lyric video for their classic “Heavy Metal Never Dies”. To shorten your wait for IRON SAVIOR‘s upcoming album, you can now enjoy some real pearls of the band’s impressive history in a brand new shape! Says frontman Piet Sielck: “Hey Folks! For our second single we have selected another track, this time from the UNIFICATION album. Follow us into “The Battle” with it’s mighty riffs, epic melodies massive choruses and yet another Kai/Piet solo duel . If you think Reforged Vol 1 – RIDING ON FIRE was good we can promise that Vol 2 – IRONBOUND is even better! Heavy Metal Never Dies!”

2021 saw IRON SAVIOR celebrate the 10th anniversary of one of their most successful records to date, The Landing. The special anniversary edition is now also available on Vinyl at THIS LOCATION!

The Landing became one of the most successful albums of the Hamburg-based band and was heralding a kind of resurgence for IRON SAVIOR back then. It contains several classic tracks such as “Starlight”, “Hall Of The Heroes” and – of course – the metal hymn par excellence, “Heavy Metal Never Dies” – a song which was streamed way more than 10.000.000 times until this day. The anniversary album not only includes 3 bonus tracks, but was also remixed and remastered by Piet himself and comes with a revised artwork by Felipe Machado Franco.