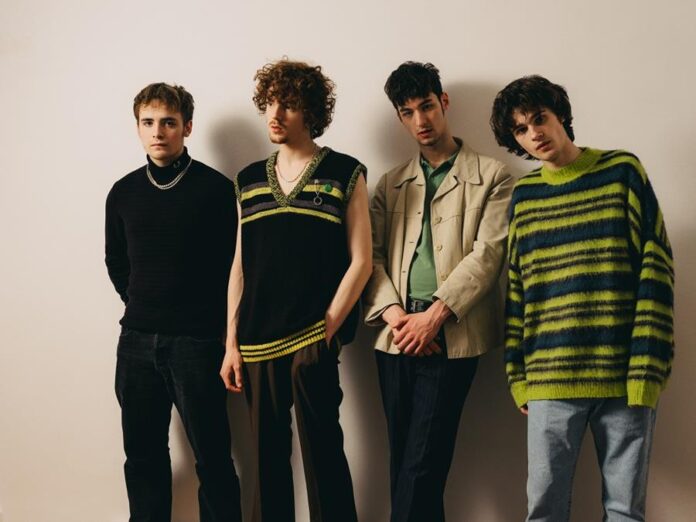 The Lounge Society are today announcing their debut album Tired of Liberty along with its lead single “Blood Money” plus a run of headline UK tour dates.

When Speedy Wunderground signings The Lounge Society released their debut single Generation Game, it instantly heralded the arrival of a special new band. Generation Game became the revered label’s fastest-selling 7” ever, and was named by BBC 6 Music’s Lauren Laverne as one of her Songs of The Year. What emerged from those beginnings were signs of a band full of engaging young commentators – the sound of young England: articulate, enraged and energised.

With a critically acclaimed debut EP under their belts (Silk For The Starving, 2021) The Lounge Society further cemented themselves as a band bound by the ideals of total intra-band collaboration, smartly picking apart the behaviour of those that govern, and never repeating themselves. Singles from the band have been fearless in their variety and unpredictability, landing blows via punk-funk, popping electronica, psychedelic rock, post-punk and garage rock. Theirs is a sound that won’t sit still.

Lead single “Blood Money” is especially direct in its comment on the corruptive force of power. The band comments:

“Blood Money is a reaction to the culture of greed that’s seeping into the corridors of power across the world. It’s a reminder that ultimately, we all suffer at the hands of self-serving elites, and it’s our personal perspective on the effects of dirty politics on the everyday lives of ourselves and people we know. For us it’s a song that completely captures this record and us as a band. It feels like the perfect development from our previous releases to our debut album and exactly how this record should be introduced. The balance of driving guitar riffs and the groove of the drums and bass is sort of a snapshot of the album. We’d never claim to be a purely dance based band and we’d never claim to be a purely guitar riff-based band because it’s the combination of the two which excites us. On Blood Money it felt like in the studio we took our sound to a different level. We approached the album recording in a totally fresh way to how we have recorded in the past and we got exactly what we wanted. We had good friends & Speedy label mates of ours Anouska (Honeyglaze) and Jojo (Heartworms) do some extra vocals in the chorus, and it really elevated it and gave it an almost operatic feel which was amazing to see develop in the studio.”

Hear “Blood Money” on DSPs here and watch the video below.

“Lives are lost and lost and lost but you’re too busy saving your pals.
You can see your boss, but you can’t see your mother or your brother.
Money takes priority.”

More about The Lounge Society’s debut album Tired Of Liberty

Returning for the third time to the studio of Speedy Wunderground’s Dan Carey, Hebden Bridge’s The Lounge Society are back; this time, with the mindset of crafting a debut album conceived out of desire, raised by collaborative muscle-memory, and kept beating, by the sacred-heart of emotional-spirit.

Recorded over two weeks in November 2021, ‘Tired of Liberty’ is a stunningly ubiquitous snapshot of instrumental meltdown, and timeless adolescence. Keen to uphold the manipulated elasticity of a recorded event, the majority of the eleven tracks that make up the record (with the exception of ‘Generation Game’, which saw its beginnings as part of the Speedy Wunderground 7” series, and was subsequently re-recorded), were written either just before, or throughout the duration of those fortnight sessions.

Brimming with anthemic-myriad, this is the real deal. Genuine urgency from a group of young creatives living and breathing their inaugurated prime, with breath-taking, anarchic-proficiency. Whether it’s “lies drenched in sarcasm” (‘Blood Money’), or, the clattering, riff-screaming irony of ‘Remains’, The Lounge Society’s deep-rooted inversion towards our “culture of anti-freedom”- the ludicrous excuses man makes for the ceasing of mankind, is one which is both culturally-associative, and, counter-culturally embracing.

Whether its personal growth, banded maturity, or a hearty combination of the two, ‘Tired of Liberty’ is an expertly captured documentation of four young-adults, at the baptism of their cultural-ignition. After all, you only get one opportunity at a debut record. “Anything that follows, is just an evolution from that.” – The Lounge Society.