BAND OF THE DAY: PERSONAL TRAINER 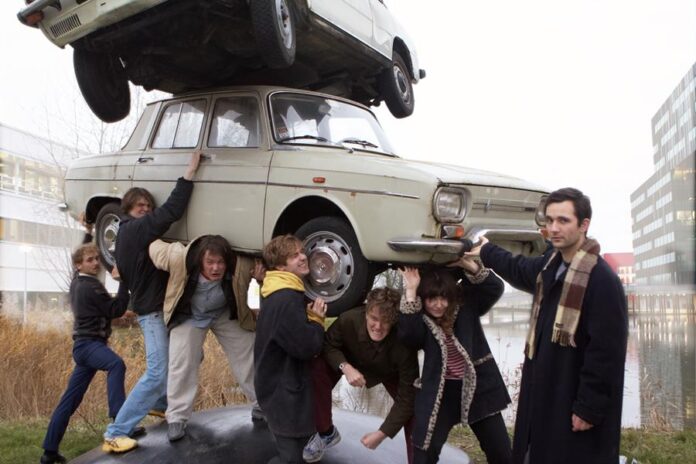 Personal Trainer are the brainchild of Willem Smit, the band’s front man and a multi-instrumentalist whose early talents saw his last band, Canshaker Pi, record with Stephen Malkmus while still teenagers. Personal Trainer began as an attempt to bottle the fervent energy of Amsterdam’s indie scene and to allow for something entirely unpredictable on stage and in the studio – an ever-shifting line-up of friends and peers playing together with only one rule: there are no rules.

“Dance”, “Dance Dance Dance” and “Song 2 Dance 2” were three of the working titles before I settled on “Rug Busters” – “busting a move” meets “cutting a rug” or something.”

Personal Trainer know how to get things done. Featuring a video by the band’s own Kilian Kayser and filmed in the parking lot beneath their keyboard player Abel Tuinstra’s studio, it’s one of those cuts of film that proves two things – firstly, if you have one great idea, that’s enough, and secondly, when forced to, yes, indie kids can dance.

“Coming up with a simple idea that feels a bit dumb, but sparks something inside of me or the band – then trying to give it your all to make the idea into something cool – has become a recurring approach for Personal Trainer.

I think we applied this to both the song itself as the video. I’d been trying to come up with an idea for the video in the van with the band or on the phone with my fellow Trainers. On our way back from a show we decided we should write a choreography and perform it, preferably in a nondescript space. The first ideas for the choreography were written in a bar in Amsterdam on that very night by a couple of Trainers, but the bulk of the thing was written and rehearsed in my bedroom.

It was a sight to behold watching six twenty-somethings busting rugs in a relatively small space. I was and am still very proud of everyone’s perseverance and heart, and I think the video turned out great. I think most Trainers – including myself – are a bit ashamed of the video too!”

The band, already known for their memorable live shows, have announced a handful of UK dates for May, including a performance in Brighton around this year’s Great Escape.

Previous article
GUT IT IN THE LOCKER
Next article
REVIEW: JAMES AND THE COLD GUN: FALSE START (2022)