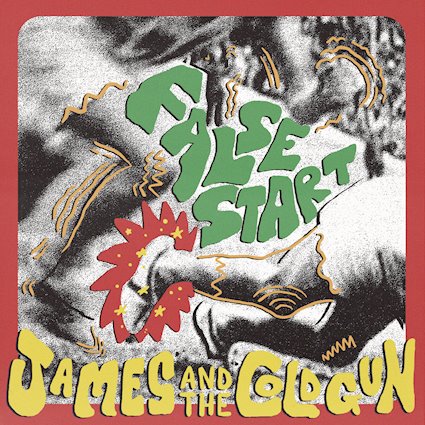 This would be a great quote anyway: “I heard James and The Cold Gun’s ‘Long Way Home’ on KEXP last year and thought this band fricken rocks! Who are these upstarts?!” something to put on your poster, even if Joe Bloggs of Nowheresville had said it.

Those words, though, come from Stone Gossard. The Pearl Jam man’s Loosegroove label released “False Start” jointly in the UK. The other company behind sticking it out is just as interesting, too. Venn Records. The Gallows label.

And that, in actuality, is essentially the sound. Some imaginary line where punk ends and grunge begins, scuzzy, ready for a fight and with as much to comment on as you can fit in to 16 minutes of riotous noise.

The bare facts are these: James And The Cold Gun are James Joseph (ex-Holding Absence) and James Biss (ex-Frown Upon). From their humble DIY beginnings (playing their mate “and amazing local producer” Abraham Fihema in burgers to do their early stuff.

Forget that. This is a move into the big leagues. Produced by Adrian Bushby (if you haven’t heard of the bands he’s worked with you are probably not a music fan) the five songs here sound like they are arena fillers already.

Yet, if you had to use two words to describe “False Start”, the first one would be “energy”. The thing brims with it from the second “Seven” explodes”. “I am so bored, I find it hard” sings James, and they turn this frustration into an anthem.

“Around The Bend” rockets along like early MSP – and not just because this band is Welsh too, this is not a lazy cliché. “Plug Me In” is like a caged animal. “Don’t know what I am waiting for” repeats James (first names will have to do given that I haven’t a clue who sings what) “I want this to stop”. Before the nihilism of the hook “Plug me in, I want to feel something”.

Years back (and you can thank your lucky stars this website didn’t start until 2014, else it would have a fan site to them and nothing more) I loved a band called Zico Chain. Their punky grunge should have been massive, and I’ve got the same vibe about “It’s Mutual”, while the stone cold glam strut of “Long Way Home” is mixed with something just a little raw and primal that two-piece bands always have.

The second word you can use for James And The Cold Gun is “ambition”. The band don’t have a live drummer, so they’ve set their sights higher, explaining: “the goal is to convince Dave Grohl to have a go on drums one day”. To be honest, So good is “False Start” that anything is possible at this point.