BAND OF THE DAY: JOSIAH 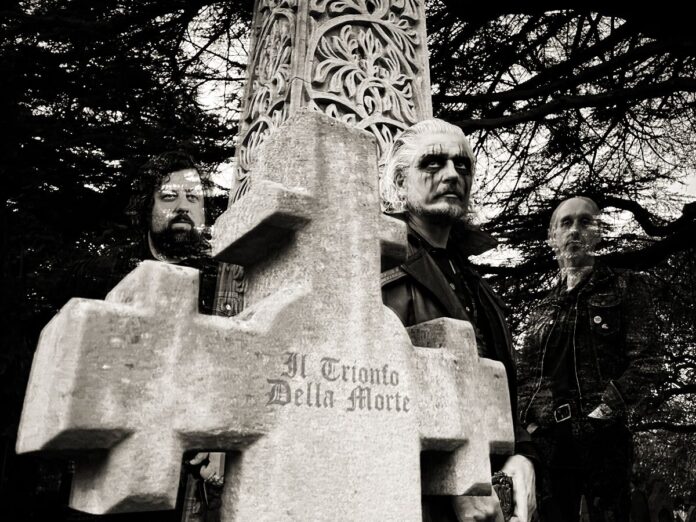 UK’s heavy psych legends JOSIAH return this summer with their first album in over a decade, to be released on Blues Funeral Recordings! ‘We Lay On Cold Stone’ will be available worldwide on July 15th, and supported by performances at Desertfest London and Black Deer Festival. Watch their brand new “Saltwater” video now!

Forging ahead to reclaim their legacy as some of the earliest architects of lysergic heavy psych, JOSIAH return in 2022 with the exultant ‘We Lay on Cold Stone’. Emerging re-energized and in peak form, the band sear forth with a barrage of irresistible hooks and tripped-out riff-romps, utterly new yet subtly infused with vintage flashes of Cream and Grand Funk. Striding boldly into a new era, JOSIAH confidently claim a place amid modern titans of psychedelic heavy rock like Earthless, Kadavar, The Atomic Bitchwax and Graveyard, asserting vast gravitas in a style they helped create.
Watch new video “Saltwater” at this location

Frontman Mathew Bethancourt declares: “We Lay On Cold Stone has been a long time coming. Perpetual dawn, finally risen. The writing spans years, and the collective pulse of the tracks, lifetimes. Recorded with purpose and heart for all the seekers who wish to hear. The resurrection is truly upon us! I’ve come to realize that every song is an opportunity. It’s a chance to push some buttons and maybe get people to think in a different way. Saltwater speaks of acceptance. Accepting the fact we drank way too deep from this earth and had a ball doing it. Feel no self-pity as you sit amongst the ruins of fear. Embrace your fate. You earned it.“

‘We Lay On Cold Stone’ will be available worldwide on July 15th, 2022 (with the ultra-limited PostWax edition shipping exclusively to PostWax Vol. II subscribers in May). Preorder now via Blues Funeral Recordings website and Bandcamp. Subscribe to the PostWax II series here
New album ‘We Lay On Cold Stone’
Out July 15th on Blues Funeral Recordings

At least a decade ahead of their time, JOSIAH had a three-album run between 2000 and 2008 that few in heavy psychedelic rock could (or can) match. Their 2002 self-titled debut, 2004’s ‘Into the Outside’ and 2007’s ‘No Time’ saw guitarist/vocalist Mat Bethancourt, original bassist Sie Beasley and a succession of drummers touring Europe and their native UK, playing festivals like Roadburn (’05 and ’07), Duna Jam and Stoned from the Underground, and headlining dates across the continent. Recorded in Leicester and Wales during the pre-social media era of heavy, those early records (recently reissued by Heavy Psych Sounds) haven’t lost their edge, and even when Bethancourt put JOSIAH on hiatus to explore garage rock and psychedelia with The Kings of Frog Island and Cherry Choke, there was never a loss of his enviable tone or signature songcraft. Nine years removed from JOSIAH‘s ‘Procession’ release, Bethancourt and company began to jam again, crafting songs with a darker edge to suit the times. Rumors of “The Resurrection” began to spread, and with a chance to record amid the pandemic-stricken latter half of 2020, they set to work on their return album ‘We Lay On Cold Stone’, to be issued in the summer of 2022 as part of Blues Funeral Recordings’ PostWax series.