BAND OF THE DAY: GLOSSY CLOUDS 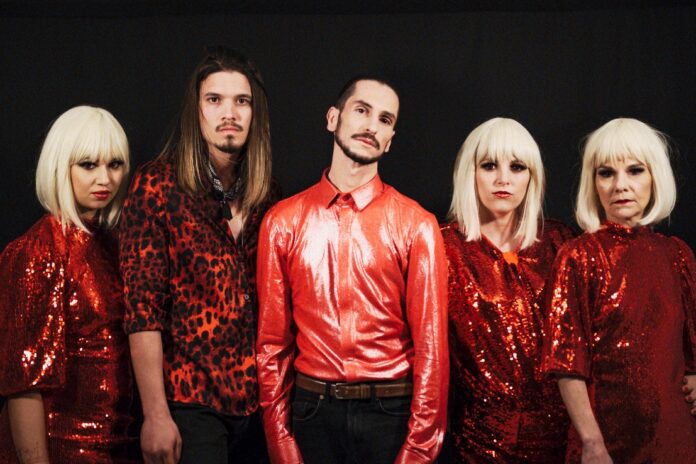 On April 29th, Lyon based indie-rock collective Glossy Clouds, share ‘My Devil’ produced by Liam Watson (White Stripes), at his all-analogue Toe Rag Studios, London.  The new single arrives with an electrifying, self-directed music video, released via UK independent label, KWS Blank Canvas Music. ‘My Devil’ follows ‘Bargain Hunter’, and ‘Nobody In The Dust’ and is the third single to be released from the band’s debut album set for release in June 2022. Glossy Clouds released their self-titled debut EP in July 2021.

Listen to ‘My Devil’ HERE

The band said “we wanted ‘My Devil’ to deliver a hypnotizing, sexy style, all wrapped up in a vintage, psychedelic rock sound. Lyrically this song was written to make a stand against jealousy and fake friendships. We wanted the visuals to emulate the music, basically, high energy with a devilish, mysterious, and elegant aesthetic. We presented the band as a mysterious creation of shadow and light to project duality, a paradox that dwells in all human beings as they confront their demons – will they attack us or possess us? We wanted to emulate an electric fight against evil, a hypnotic, epileptic and sexy atmosphere. Just like this new single full of brutal enigmas!”

Glossy Clouds are Jérôme Bralet (vocals and guitar), Hugo Merle (Drums) and their three female choristers. The duo were introduced by their respective girlfriends and immediately hit it off, a shared outlook and energy for music, art, photography and life were channelled into their songwriting and performances to create the unique collective ‘Glossy Clouds’. The result is not just a band, but a creative universe where the gentle humour and anything-goes lawlessness are utterly riveting. The inseparable songwriting duo are outsiders looking in, effectively rock kids in a dance town. It’s this that binds them.

‘Glossy Clouds’ have been supported online by the likes of Wonderland, Clash, This Feeling and The Most Radicalist to name but a few. A live showcase of all releases was performed at 229 London at the end of 2021.  The performance aligned the band’s unique songwriting and visuals to craft a complete artistic statement and an electric, sexy glam atmosphere. Audiences were treated to matching custom-made costumes, wild stage moves and unlimited supplies of energy.

With music that captivates the listener from the outset, alongside a compelling glorious, unadorned, unpretentious thirst for self-expression, the future looks very bright for Glossy Clouds.

Previous article
DO IT MY WAY
Next article
REVIEW: BOB VYLAN – BOB VYLAN PRESENTS THE PRICE OF LIFE (2022)