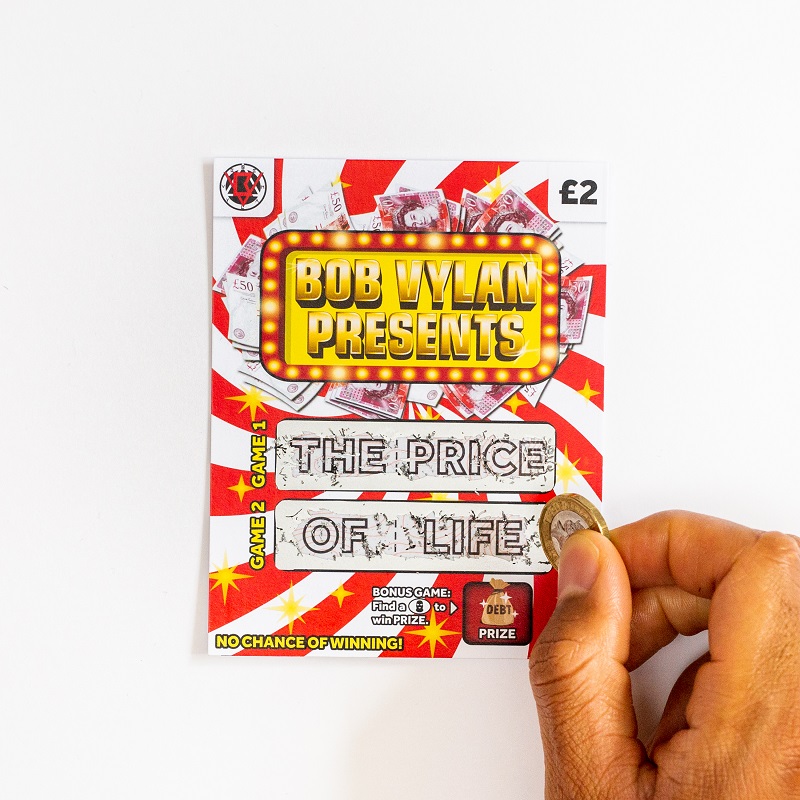 As I write this, “Bob Vylan Presents The Price Of Life” is a Top Twenty album in the UK. Bobby Vylan (the singer) posted a message on social media to suggest that he and Bobby Vylan (the drummer) were delighted to be competing against what he termed “the million pound indie labels” and the “billion pound major labels”.

That alone is worth praise, but that doesn’t even come close to explaining why this is the most important record in years.

Rewind to last November. I’d bought a ticket to see The Offspring months before. A couple of days before the show I’d received an email with a press release about a single called “GDP” by Bob Vylan (the band). It was astonishing. Brutal-  both lyrically and musically – it spoke about life for many in the UK, living on the estates and in the gangs. And if I can’t empathise (for which I am extremely grateful) then the chorus had a sentiment that made me think more than most do: “The BBC”, it spat. “is talking ‘bout the GDP. That means fuck all to me. I gotta eat”.

Now, my Twitter backdrop proudly proclaims that “Tories are lower than vermin” (which I utterly and totally believe) but the fact is that it isn’t the Tories that have left these poor people, to rot, its all of us.

Then came the night of the gig. Bob Vylan (the singer) came out on stage at Resorts World Arena and yelled that we should “kill the Queen, because ‘she killed Diana’”. Full disclosure, I cheered. A lot didn’t. There was an atmosphere while they were on stage and its not often that a show feels as threatening as that one did. It felt as though Bob Vylan were going to say what they were going to say and you were with them or against them – what made that even better was they didn’t seem to care which.

The last song on “….Price Of Life” seems to make it clear. “Whatugonnado?” “Whatugonnado?” it challenges, “its either them or you.”. You’re either on the right side of history. Or not. And the fact it suggests that we “body Boris with a shot” is entirely in its favour.

One thing this record is not, though, is Easy Listening. “Wicked And Bad” brings you into a world that many of us won’t understand, “Big Man” likewise, but the music I can discuss, because its heavy. Vicious punk riffs, thunderous drums – there’s more opportunity for a moshpit here than a Slayer gig, frankly – and the quickfire rap delivery that Vylan mostly adopts seems to bring together the two extremes.

If in honesty, some of the experiences bewilder, then thats not true of the stunning “Take That”. The suggestion that we should throw Churchill’s statue in the river, is followed with a glorious “yeah, let the bitch drown, got the Gammons all feeling sick now” and its in that moment you have clarity as to how unusual this record is. It says the things that some of us only dare think, and most would find it abhorrent.

“Health Is Wealth” is a manifesto as to why you need to adopt a plant based diet instead of allowing governments to “kill kids with two pound chicken and chips”. The reggae flavours take the song into different areas to many here, but the line “a pig can’t kill what a pig can’t catch” returns it to its roots.

“He Sold Guns” is the most violent (in all senses of the word) ballad you’ve ever heard, and the desperation with which the hook of “take a look at this place, it’s a fucking mess” is delivered is the one take away you should keep from the album.

“Must Be More” deals with escaping the life of crime and there’s an nihilism here, that I wouldn’t pretend I empathise with, “Pretty Songs” mind you, that’s different. Excoriating anyone who doesn’t use their platform over a raw, almost grunge track. is visceral. Everything here is from the heart.

“Turn Off The Radio” really is an extension of that. The bile with which it screams “pussy, shut the fuck up” and the chorus is not so much a middle finger, as a burning barricade.

“Bait The Bear” takes the direct action of the album to the next level, suggesting that “we wage war against the state”, “Phone Tap” discusses police surveillance and concludes “Alexa, take me to prison”, while “Drug War” is the nastiest punk rock around, and its not the dealers as much as prescriptions that its attacking.

And in many ways that sums the record up. It deals in extreme viewpoints, yes, but also in the margins, as if to say the solutions are as complex as the problems in the first place.

It’d be wrong to say that the average person is having these conversations – after all most of the sheep are happy to read The Daily Mail, The S*n and watch Love Island – but for some of us, this is a state of the union address and a window into another world.

It’s 25 years in June this year since The Prodigy stuck out “Fat Of The Land”. There was almost, it seemed, a seismic shift around that album. Kerrang!  Covered it, and there was a discussion around what constituted “heavy” music and it began a process that blurred the lines and changed things – for the better – irreversibly.

In its own way “Bob Vylan Presents The Price Of Life” will be seen to be equally as important in years to come.