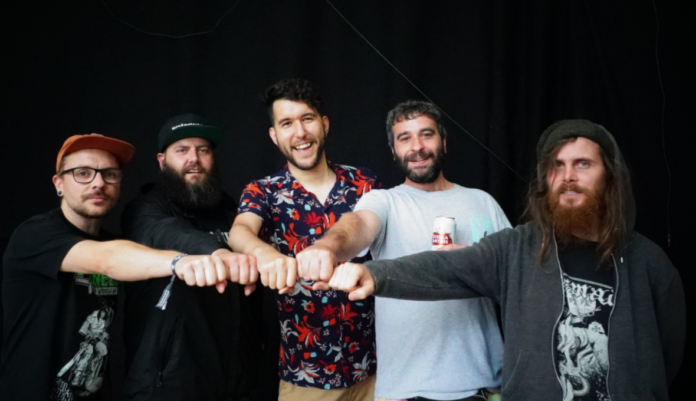 Veteran UK Melodic Hardcore act DARKO have returned with ‘The Ladder’ – their ambitious first new release in over five years.

The track offers a first listen to the band with new vocalist, Tom West (previously of metallic punks Almeida), who brings a jarring intensity and an unsparing attitude to the south England quintet.

Gravelly former vocalist Dan Smith retired from the band in 2020, relocating to his native Australia after a decade of worldwide touring.

DARKO’s updated incarnation is likely to perk up many ears – this new single unapologetically serves up fiercely political lyrics across 7+ minutes of progressive thrash.

West uses his new platform to immediately urge fellow punks to take a stand against the scene’s “embedded misogyny”, screaming “How can we bring change with only people who look like us up on stage?”. Katz Hinsley of Manchester’s Follow Your Dreams adds her signature yells to the track’s crescendo, with the passionate refrain “the scene is big enough for every one of us”.

‘The Ladder’ is available on all digital platforms ahead of the upcoming new EP ‘SPARKLE’, set for release on Lockjaw Records (EU) and Thousand Island Records (NA) in summer 2022.

Fans who want early access to all four tracks can purchase an exclusive 34-minute 4K feature, directed by Benny P (KoRn, Lenny Kravitz, Buzzcocks), featuring candid interviews and playthrough videos of ‘SPARKLE’ in its entirety. ‘SPARKLE IN MOTION’, is released today on Vimeo On Demand, at https://vimeo.com/ondemand/darkosparkleinmotion

‘The Ladder’ is available on all digital streaming platforms.

SPARKLE IN MOTION’, is available to rent:
https://vimeo.com/ondemand/darkosparkleinmotion

Over a raucous decade, DARKO have by definition, become veterans of the UK Punk scene and it is not uncommon to see them standing as an essential name within the intricate and complex world of contemporary Punk and Hardcore.

The band, urgent and charged with conviction, are set to continue championing and contributing to the health of the very scene that birthed them as they pen the narrative of their new chapter.

In 2020, longtime voicebox Dan Smith returned to his native Australia and parted ways with the band after so long in the vox seat. Dan’s evocative, emphatic and emotional lyricisms have left quite the legacy throughout the band’s releases. Darko’s four other noisemakers have curated a backdrop of vicious, hybridised Skate Punk and Melodic Hardcore that has been pushed beyond itself across thirty countries.

Darko have now enlisted longtime touring compadre Tom West of UK shredders, Almeida. The band have never hid from what ails them or the society they inhabit but with West at the vocal helm now and forgoing the complacent societal padding forced upon us all, his lyrical discomfort has spurred the band’s most unbarred barrage yet.

Darko’s evolution is tied to their past but with threads so long that there is an abundance of slack to play with. Notes of Polar Bear Club, Mastodon, A Wilhelm Scream, Protest The Hero, Rise Against and Propagandhi can all be savoured in their contemporary flavor profile.

Rob, Chris, Karl, Andy and now Tom have come together to the highest degree, poised and proud to show you a reimagined, powerful and determined Darko.