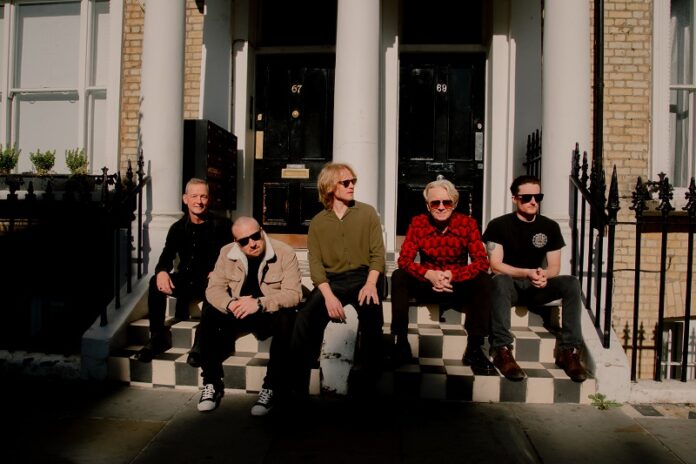 Take Tudor, a Transylvanian singer looking for inspiration in the UK. Add in Wayne, a Mancunian songwriter, and his amazing set of fellow Mancunian musicians, James, Shaun and Ryan… and right there you have all the ingredients that make up five-piece guitar band The Cuza. The band live, love and hang out in the musical city of Manchester. They released their new single “A Life Full Of Colour” on 22nd January 2023.

It was Wayne who, back in 2018, in a quest to form a band, had been working on a wealth of material and so brought together cohorts James, Shaun and Ryan to develop it. After nearly giving up on their search for a vocalist they came across Tudor in 2019. The chemistry was instant: The Cuza was complete.

Since that moment, the band have revelled in originality (a rare thing) and pride themselves in being both prolific and innovative in the studio, drawing from collective eclectic musical influences: from Northern Soul to Death Metal, from Bowie to Slayer. You get the idea: the band love anything that makes them, think, feel, dance, sing, cry, jump – and more besides: a.k.a. “no barriers”. This glorious fusion of cultures and personalities has resulted in a seemingly unstoppable flow of fabulous music. Sumptuous melodies, captivating lyrics, soaring guitars, energy, beauty, edge and pathos; all delivered with hook, after hook, after hook.

They are also incredible live, supporting the likes of New Model Army, never seeming to play the same set twice with their own unique delivery of an ever-growing musical catalogue. Having already recorded at Abbey Road, Metropolis and Larkins Farm, they’ve pulled twelve tracks from that catalogue for the long-awaited debut album to be released later this summer, produced by the legend that is Adrian Bushby (Foo Fighters and Muse). Wayne explains the rich layers in this forthcoming body of work: “The debut album is a great representation of our early development as a band, there’s a variety of moods in there and every track has a story to tell..”

Meanwhile, the band released their brand-new single “A Life Full Of Colour” on 22nd January. Songwriter Wayne claims the track is, intriguingly “…an introduction to what The Cuza is and a hint towards what The Cuza will become.” The theme of song itself is a very personal and poignant observation, inspired by a sad farewell to a friend. He explains:

“I had just spent a very painful afternoon saying goodbye to a friend, who for reasons only he could have explained, had decided to leave this world way too early. That same evening A Life Full Of Colour just seemed to pop into my head. I grabbed a guitar- and it was down in about ten minutes, like it had always been there. This song is a reminder to me, and hopefully others, that there’s always a brighter day ahead. Those spontaneous moments of joy that hit you when you least expect. Look for those colours.”

GET THE SINGLE “A LIFE FULL OF COLOUR”