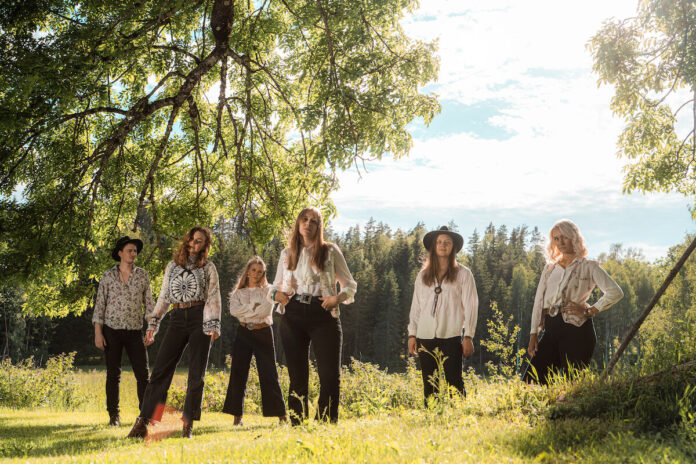 70’s rock meets modern indie as Children of the Sün releases the first single from their second album. The band’s 2019 debut album “Flowers” put the Swedes on the radar, offering a youthful and contemporary twist on the hippie-rock of the late 60’s and early 70’s. Now the 6 person group returns with “Gaslighting”, a single dealing with toxic love and explosive growth. Strong and powerful vocals, direct melodies, and colorful rhythms set the mood of the new track, displaying a fresh take on vintage-influenced rock.

“Gaslighting” is out now on all streaming platforms. The single is the first one leading up to Children of the Sün’s second album “Roots”, which is set for release in 2022 via The Sign Records.

Inspired by Janis Joplin, Rival Sons, and the free lovin‘ spirit of 1969‘s legendary Woodstock Festival, Children of the Sün embody both the carefree and reflective sides of classic rock music. Following their 2018 success in the Swedish music competition Livekarusellen, the band released a self-titled EP and later came under the wing of The Sign Records, joining acts such as Hällas, MaidaVale, Skraeckoedlan, and The Hawkins. In 2019 the band released their first full-length album Flowers which was received with great love from the audience and the vinyl sold out just a few months after the release.

The song “Her Game” from their debut-album got chosen by the Swedish nationwide newspaper Aftonbladet on their list of best rock songs of 2019.

Since then the band have played on festivals and stages around Sweden including Arvika Hamnfest, Festival Of The Midnight Sun, Putte i Parken, The Sign fest and hosted their own show in a barn out in the woods together with drummer Björn Fryklund (Freak Kitchen) Earlier this year they supported Trummor & Orgel on their tour.

Today Children of the Sün looks forward to releasing their next album Roots via The Sign Records on March 18th, 2022.