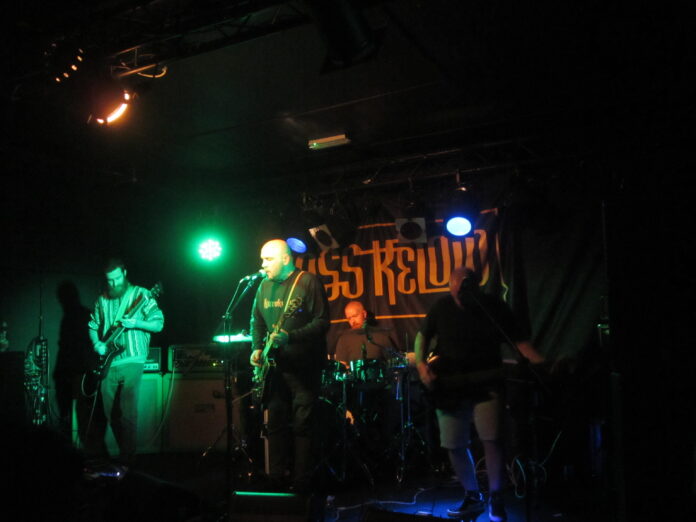 Until I arrived at the venue tonight deep in the heart of Digbeth, I hadn`t realised there were four bands on. The first of which had just completed their set so local outfit Jeremiah A.D. it was who kicked off proceedings for me. The band`s social media banner advertises them as ` Heavy tones and broken bones` which watching them tonight isn`t far off the truth. This quartet Ben Curtis (vocals), Joe Barber (guitar), Daniel Palfreyman (bass) and Tom Woods (drums) share a thirty five minute set of big riffs, heavy chords and pounding drums and reminded me at times of The Deftones. Although Singer Ben looks like a supply teacher who has walked in off the street he commands the audience with his menacing presence as his stalks the stage. They didn`t share the names of any of the numbers but assured us that they are all there on that Swedish audio streaming site. Definitely a band to catch again.

Tuskar are a stoner/sludge come doom duo who are based out of Milton Keynes and are due to release their debut full length album ‘Matriarch’ in February. I have to say vocalist/drummer Tyler Hodges and guitarist Tom Dimmock certainly make a hell of a lot of noise. There was no let up tonight in their thirty odd minute set which offered up staple tracks like `The Tide` and `Into The Sea` and even a flavour of what`s to come with `Grave` a cut from the new release. The guys are tour buddies with Boss Keloid so there`s still a number of dates around the country if you wanna catch them and their wonderful wall of noise.

As the saying goes, i`m no spring chicken and at my time of life, it has to take something special these days to really spike my interest in a band and I have to say Wigan heavy prog-psychers Boss Keloid have certainly done that. It`s taken Alex Hurst (vocals and guitar), Paul Swarbrick (guitar), Liam Pendlebury-Green (bass) and Ste Arands (drums) fifth album `Family The Smiling Thrush` which was released in June to do just that. The album explores the notion of the collective being greater than the individual, embracing all flaws and the strengths of each. There`s no fuss as the band tune up on stage before they head straight into `Gentle Clovis` which I have to say is my favourite track on the album which ebbs and flows as it evolves and is delightfully mesmerising with some intricate guitar chords shared along it`s journey.  The set understandably comprises of all but one of the tracks from the latest release plus an older number.

The quite dreamlike ` Hats The Mandrill` follows before ` Orang Of Noyn` which for some reason always brings to mind Polish progressive rockers Riverside during this nine minute epic musical expedition. Again `Grendle` is initially a little `out there` before becoming a much more robust rock out. I read that `Smiling Thrush` was written by guitarist Paul about the pain of losing his father and having lost my own father it`s a number that certainly makes me reflect back during it`s delivery.  We have a brief discussion between the band and the audience over `Flatt Controller` which the guys assured us was nothing to do with Thomas The Tank Engine before they launched into this quite extravagant offering.

The band close out tonight`s show with `Chronosiam` from their 2018 release `Melted On The Inch` and it`s a cracker to end on with singer Alex kind of jumping/falling off the stage to share a few chords and hi five the faithful as this epic number concludes.

I have to say I was a little anxious tonight as I really love the band`s latest release but I needn’t have worried as Boss Keloid delivered in spades. To me these guys are much more that just your average heavy prog-psych band, they have that kind of questioning intelligence in their music.

The guys have a few more dates left around the UK before the end of the month so get along and witness what must be one of the albums of the year get a blast in a live setting.