BAND OF THE DAY: ELECTRIC SIX 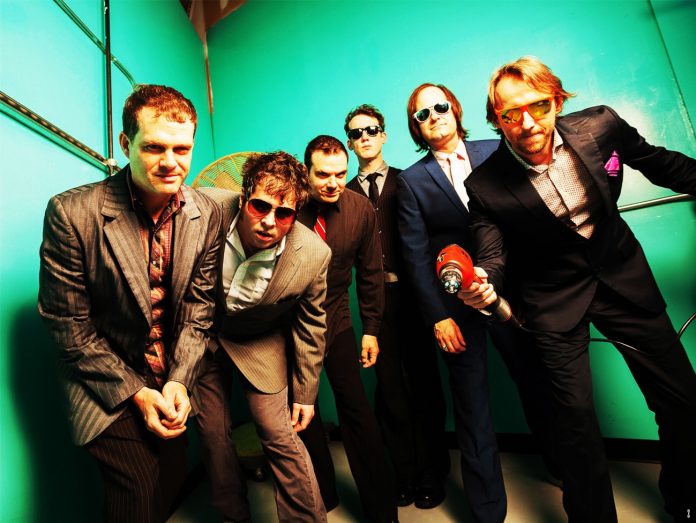 When you turn thirteen you get to have a bar mitzvah. That’s the definition of lucky. Want another example? If you live on the thirteenth floor of an apartment building, you get to tell people you live on the fourteenth floor, and this allows you to come off like a slightly higher roller. You see where we are going with this? Thirteen is not bad at all…nay, it’s good!

Name a band that has made thirteen albums besides Sparks. You can’t do it.  Now you can. Electric Six joins the lucky thirteen club with their new release ‘How Dare You’ which is available this October on Metropolis Records. Electric Six has been around a long time now and must be treated with respect, the kind of respect that Sparks gets. As well as Neil Young. Neil Young probably has thirteen albums come to think of it. Treat us like you would Sparks and Neil Young.

‘How Dare You’ moves seamlessly from the bouncy and poppy numbers like ‘Arrive Alive’ and ‘She’s A Forgery’ to the brooding and menacing ‘Dark Politics’ and the title track ‘How Dare You’.

Dare we say that E6 ventures into prog rock with relatively complicated numbers like ‘The Hotel Mary Chang’ and ‘The Chimes Of Titus’. Does that sound like a band down on its luck? Fuck no.

‘How Dare You’ is a showcase of talents, ideas and dreams and it winds its way through you like  a colonoscope that is administered without anaesthesia, ending with the gorgeous alt-country stylings of ‘A Quiet Man’, a sad waltz for all the West Texas petroleum industry whistleblowers who live the rest of their days in witness protection programs.

To summarise, ‘How Dare You’ is Electric Six’s thirteenth album, but that the only thing unlucky about that is that it just means you have to wait one more year for their epic ass and titties record ‘Staten Island Ass Squad’, which will also come out on Metropolis Records. When you look at Electric Six, you do not meet their gaze and you revere them the same way you would Sparks, Neil Young and Venom. And respect, as always, is earned. Luck, in all its various forms, is just a number.