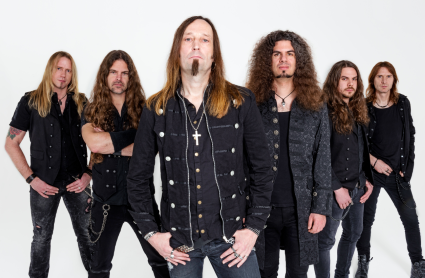 Mighty German melodic metal act Mob Rules are set to release their magnificent eighth studio album ‘Tales From Beyond’, a sizzling, heady cauldron of twin-guitar-and-keyboards-led deeply melodic progressive and power metal, on March 18th on Steamhammer / SPV. ‘Tales From Beyond’ will be available as a DigiPak CD (containing a bonus track + poster), double gatefold white vinyl (with printed inner sleeves + CD in paper sleeve) and digital download; there will be an extra itunes version including an additional exclusive newly recorded bonus track, ‘Ghost Town’.

Mob Rules ensconced themselves for ten months in their own Dwelling Mound Studio in Nordenham, writing and refining the eleven gems of songs contained on ‘Tales From Beyond’, which was superbly produced at his Bazement Studio by tried and tested sound engineer Markus Teske (Vanden Plas, Saga, Firewind etc). The earthy and multi-faceted sound which the band introduced on their last album, 2012’s ‘Cannibal Nation’, has evolved ever further, while their Celtic / British influences have been honed even more finely. The result is a multi-layered, diverse, powerfully melodic offering, marked by a ‘new directness’, which can only win over many new fans of these exceptionally talented metal meisters.

Lyrically, Mob Rules continue to go down their own unmistakable path, influenced by historical events and inspired by literature. Album opener ‘Dykemasters’ Tale’ is based on ‘The Rider on the White Horse’ by German writer Theodor Storm, a novella set in northern Germany not far from the band’s base. The song ‘Somerled’ is about a historic character from 1140, half Scotsman, half Viking, who was evicted from his home region of Argyll, went on to reconquer it and eventually made peace with the Vikings by marrying the King’s daughter and uniting after two victorious naval battles the occupied Scottish isles under the name of “Kingdom Of The Isles”. ‘Dust Of Vengeance’ sees Mob Rules apply themselves to another chapter of northern German history, this time the Oldenburg author Florian Gerlach’s ‘Smogger Trilogy’ about the sinister thoughts we all occasionally have but never act out. And last but not least, the three-part title track ‘A Tale From Beyond’, inspired by Andy Weir’s bestseller ‘The Martian`, which was made into a movie in 2015, Mob Rules present a rather free interpretation of the subject matter with plenty of personal references.

18 months ago Mob Rules celebrated their 20th anniversary with the release of the elaborate and highly acclaimed best-of box set ‘Timekeeper’. Powerplay Magazine’s Dave Cockett awarded it 10/10, proclaiming “Founded in Northern Germany way back in ’94, they’ve thus far released seven studio albums of sophisticated, highly addictive power metal with an impressively high melody quotient….A beautifully packed three CD/DVD box set with an extensive booklet, it’s obvious that this is far from the ‘easy money’ cash-in type of release … a real labour of love, this has been meticulously pieced together, primarily from the perspective of their fans, and as such is an absolute must.” Now ‘Tales From Beyond’, yet another ‘absolute must’, looks all set to blast Mob Rules right into heavy metal’s heady Stratosphere. 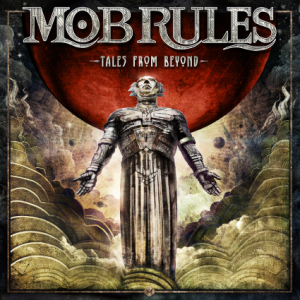 Previous article
Like A Machine
Next article
Unguided’s New Missile