Calling All Astronauts are a London based, politically charged three-piece who rose from the ashes of ‘US:UK’. Featuring vocalist/programmer/producer David B, ex-Caffeine guitarist J Browning and Marionettes bassist Paul McCrudden, Calling All Astronauts blend electro, rock, post-punk and even dubstep to a sound that ignites and engulfs.

Since their incarnation in 2012, the trio have racked up a slew of accolades including four Number One’s in the Twitter Music Charts (knocking Adele from the top spot), having their latest single “Empire” notch up a three-month stint in the ‘Official European Indie Chart’ peeking at Number 2, and sharing stages with the likes of Echo & The Bunnymen, PWEI, Sigue Sigue Sputnik and A Place To Bury Strangers. The band have also headlined and sold out ‘Alan Magee’s Death2Disco’ at Notting Hill Arts Club. 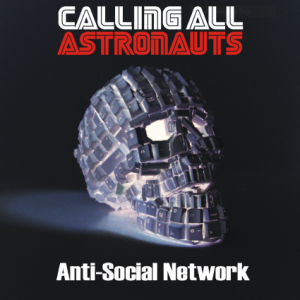 The electro punks have a prolific output, releasing seven singles to date; this has helped the band pick up a swell of support from all four corners of the globe with numerous rock and alternative radio shows taking the band into their hearts by putting them on heavy rotation. The threesome have been featured on BBC Introducing, and were invited into the studio by Tom Robinson for his BBC 6 Music show. Their underground attitude to video production has also received great praise from many, including Irvine Welsh, who, after viewing the video for ‘What’s So Good About’, proclaimed it as ‘Brilliant’.
Calling All Astronauts now press on with the release of their blistering new second album ‘Anti-Social Network’, which is out now in stores via Supersonic Media and rammed with eleven killer cuts. Look out for festival and summer shows later this year.