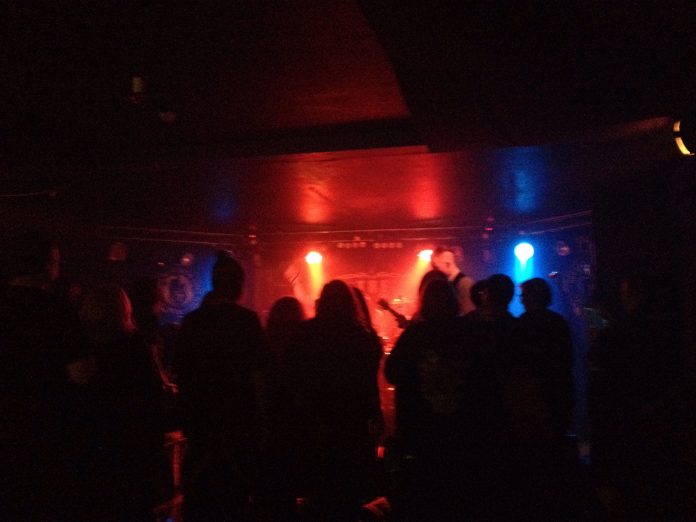 Birmingham in the early spring in a room in a scruffy part of town above a recording studio. On a Monday night. When it’s cold outside and drizzling outside. No one said starting in rock n roll was easy, did they?

Nonetheless every quest for world domination has to begin somewhere and, given this set of circumstances, a pretty decent smattering of people is here to watch this co-headline tour of the UK by two rather hotly tipped acts.

From the ashes of Colt 44 comes 48 Hours. The three piece do a rather nice line in hard rock filled with chorus and pretty killer harmonies. “Nothing Left,” and “Liar,”  burrow their way in and won’t leave while “Scars” slams most agreeably.

“This one is called ‘Forget’ so eerr don’t forget it,” offers singer Adam helpfully. Such an occurrence is unlikely given that it’s a rather good song. As, to be fair, is “Give It Up” which follows and explores the heavier end of their spectrum.

The set ends with “Secrets” – the title track of their recent EP – and you can reflect on the fact that even in an age where we have a plethora of excellent hard rock acts, in 48 Hours we have another to add to the list. Ironically if 48 Hours were American rather than from the South East of England they might have already broken through, but as so often we make bands on our own doorstep work harder.

Even allowing for an occasionally fuzzy sound – let’s be honest that’s not the band’s fault – and even at this early stage in their development, it’s quite clear that 48 Hours have the talent and the hooks to be stars.

Arriving onstage to The Doors’ “People Are Strange” AshesToAngels are a dapper lot. The Bristol four piece are wearing more black eyeliner than anyone has seen in a good few years and guitarist Adam is in a better suit than your humble scribe would wear to a wedding. Even before they play a note it’s quite clear that ATA mean business.

So it is that when they do get cracking that feeling of a band who intends to go places quickly, is only intensified. There is a tangible hunger here. Singer Crilly is a one man dervish. Part frontman part Tasmanian Devil, from the get go he’s off and he ain’t stopping until he’s won every single person in here over to the cause.

In fact, such is the energy level here that you can’t help be swept up in the performance. AshesToAngels are less a band and more a force of nature that is intent on engulfing everything in its path.

The songs? Well they are a turbo charged cross between goth and punk. They crunch, they rock, they roll and blimey they’ve got something about them. But somehow the songs are secondary to the live experience itself. And like the band who plays them, they have more than half an eye on bigger things. But all of the tunes here, without fail – christ, even their ballad is urgent – are crackling with an electricity that you can’t fake and you can’t manufacture.

All you need to know about AshesToAngels is this: mid-way through the set they allow themselves a breather. “Give me a hallelujah if you think we suck,” yells Crilly. Silence. He thinks for barely a second and shoots back: “Sweet, that means you have to buy one of our T-shirts.”

The band motto might be “we scare because we care” but the boy clearly has his head screwed on. Expect to see a lot more of AshesToAngels. They are but a couple of well placed festival slots away from being huge.