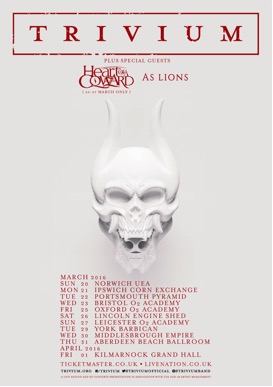 Following the band’s triumphant show at the Rock ‘n’ Roll Tattoo Store in Leyton last weekend, London five-piece As Lions have announced that they’ll be supporting American metallers Trivium, on an eleven-date UK tour in March/April. They’ll also be joined by Heart Of A Coward.

Frontman Austin Dickinson says; “We’re very excited to be joining the amazing Trivium family on their UK trek, as well as our good friends in Heart Of A Coward! Some of the best people we know are on this tour, and we can’t wait to be part of it, so come down to a show, get rowdy and crowd surf! You know you want to. See you in the pit my friends.”

The band will also be bringing their explosive live show to various UK festivals including The Great Escape and Camden Rocks in May and Download in June.

After signing with Better Noise Records at the end of last year – part of the Eleven Seven roster – the band will be releasing new music in conjunction with their live shows. Keep your eyes and ears peeled for further details soon.

Comprised of vocalist Austin Dickinson, guitarists Conor O’Keefe and Will Homer, bassist Stefan Whiting, and drummer Dave Fee, As Lions formed in late 2014. Having played various shows throughout 2015, they have also been hard at work recording their debut album, news of which will be announced later this year.

Cultivating inspiration from bands that encompass a wide range of rock and metal (Muse, 30 Seconds To Mars, Bring Me The Horizon), fans can expect a blistering record that will both fuel the mosh pit and encourage crowd sing-a-longs. This was witnessed in full when As Lions performed at the legendary Wembley SSE Arena alongside Five Finger Death Punch on November 28th to celebrate their new label home.