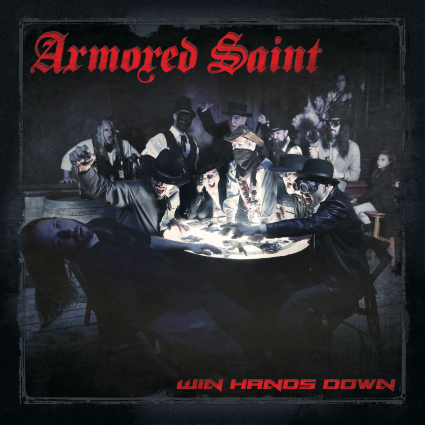 Los Angeles, California’s Armored Saint are set to release their seventh studio album next week. The album, Win Hands Down, is all things Armored, a vintage crush of classic power propelled by a cathartic blast of life in the year 2015. The album is scheduled for release on June 2nd in North America, with release dates for June 1st in Europe/UK, and May 29th in DE/CH/AT. A limited number of European deluxe box set bundles have been imported for North American fans. Those bundles are going fast and can be ordered now at metalblade.com/armoredsaint, along with double vinyl of the new album. While there, check out the brand new music video for the title track from Win Hands Down, then watch the newly released behind the scenes HERE.

Head over now to metalblade.com/armoredsaint to jam this amazing album in its entirety below it’s available in stores. John Bush will be a guest on the Full Metal Jackie radio show this weekend! Find a station airing/streaming the show: http://bit.ly/1J76LXu

John Bush (vocals) and Joey Vera (bass) also recently dropped by SiriusXM’s NYC headquarters to hang with Liquid Metal host Jose Mangin for an interview and to host their own Takeover of the channel playing music from Anthrax, King’s X, Pantera, Fates Warning and more! In addition to this hour special, John and Joey will be introducing songs off Win Hands Down all week on Liquid Metal starting on Tuesday morning June 2nd and airing through Sunday night June 7th.

ARMORED SAINT will wrap up their run with the legendary Saxon this weekend before heading to European Festivals. The group will also only be performing one, very special headlining date in the US this year and it’s in Las Vegas at Count’s Vamp’d Rock Bar and Grill on July 11th, so don’t miss out if you are in the area. Either see below or head over to facebook.com/thearmoredsaint for all tour dates and additional information.

ARMORED SAINT is frontman John Bush and bassist Joey Vera, guitarist Phil Sandoval and his brother, drummer Gonzo Sandoval and guitarist Jeff Duncan – five masters of metal that combine to forge one of the genre’s most criminally-unsung forces.