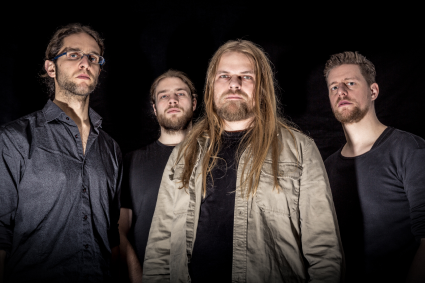 Swiss apocalyptic sludge juggernaut ZATOKREV will release their titanic new album ‘Silk Spiders Underwater…’ on April 13th through Candlelight Records.
ZATOKREV was founded in April 2002 in Basel, Switzerland. Although the first eponymous album (tracked in their own rehearsal room) was only intended for demo purposes, the band were immediately offered various deals, and finally released the record in 2004/2005 on Codebreaker, Earache and Division Records to overwhelming media praise all over Europe and the States.
The following album ‘Bury The Ashes’ was released through Firebox Records, Finland in 2007, while the third and most successful ‘The Bat, The Wheel And The Long Road To Nowhere’ finally got a deserved world wide release in 2012 on the UK-based cult label Candlelight Records.
Zatokrev have claimed stages on countless tours and festivals all over Europe, while gaining the status of an intense live act.
The numerous line-up changes throughout these years did not harm the creative output of the band: Drawing from their sludge/heavy background, the band is now a lot more open to experimentation, and does not hesitate to expand towards doom, death and black metal, as well as even psychedelic rock – so it’s no coincidence that the lyrics and the artwork both bend towards more metaphorical themes.
2014 saw the recording of the new album ‘Silk Spiders Underwater…’ at the infamous Rec Studio in Geneva with Serge Morattel and finally mixing and mastering by Raphael Bovey (just as the preceding album). The 65 minutes worth of new material feature denser song writing and variations in dynamics and arrangements.
01. Runaway Soul
02. Bleeding Island
03. The Phantom
04. Loom
05. Brick In The Sky
06. Discoloration
07. Swallow The Teeth
08. They Stay In Mirrors
Pre-order: http://www.plastichead.com/item.asp…