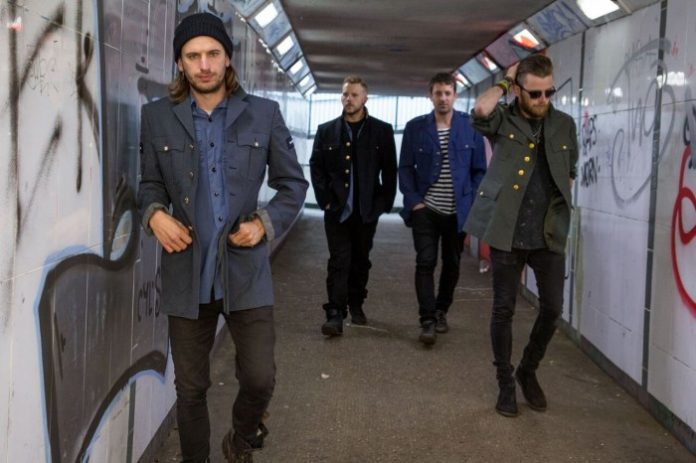 Worcester punks release their debut
Living In Anger’ is the debut EP from UK Feds, a four-piece ska-punk band from Redditch, West Midlands, UK.
Members Jon Kings (lead vocals/guitar), Ryan Kings (vocals/bass), and Ricky-Lee Cooper (drums) and Mikey Rainsford (guitar/vocals) describe their music as heavy ska, saying;
“We don’t profess to be political, or that we are saying anything brand new, but we write songs about what we see going on, and it works for us.  The same stuff that affected 70’s bands is still affecting people like us today, except not many bands seem to wanna complain or write about it.  We do.” – Jon Kings
Living In Anger was recorded at Warwickshire’s prestigious Gospel Oak Studio’s with Grammy Award winning producer Mike Exeter (Black Sabbath’s 13) at the helm, working with the band to capture that live raw sound on their debut EP.
Gospel Oak Studios has already seen the likes of; Simon Fowler and Steve Travers (Ocean Colour Scene), Alvin Ewin (Steel Pulse Band), Stone Gossard (Pearl Jam), Jola (Adam Ant) and Jimmy Western (The Voice) pass through the doors, making it the perfect location for this fast rising band to lay down tracks.
The UK Feds only formed back in September 2015, but already have a UK Wide tour with Ruts D.C under their belt. Having secured the coveted support spot due to their willingness to write music about what they see going on in the world around them. Segs (Ruts D.C) referred to them as ‘a powerful band’ and admitted they choose the band to join them on tour to help the punk legends themselves ‘up their game.’
The band’s musical influences include likes of The Police, The Clash, The Specials, Radiohead and The Foo Fighters to name a few. The band keep their music raw and in your face – the way it sounds live. The reggae vibe has always been big in their home area of the Midlands, UK and provides a major influence on their sound and style.
Live reviews are nothing but glowing with the band putting hugely exciting shows wherever they play. ‘Living In Anger’ is available to purchase now on iTunes: (https://itunes.apple.com/gb/album/living-in-anger-ep/id1049354487)
and to stream on Spotify (https://open.spotify.com/album/5CESnqx3OpBDeRIrn2hh2e)
For more information about the UK Feds please visit www.ukfeds.co.uk
Social Links:
https://www.facebook.com/UKFeds
https://twitter.com/UKFeds
https://soundcloud.com/uk_feds
https://soundcloud.com/uk_feds/sets/livin-in-anger-ep
https://open.spotify.com/artist/7LTbQMLUfk444Z2XV2mpov