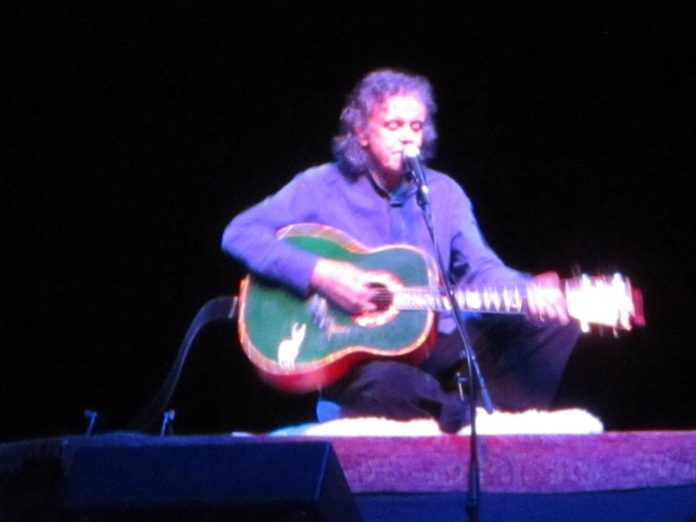 The man his mother named as Donovan Phillips Leitch 69 years ago arrives in Birmingham for a near sell out show, and Damian decided to go

The lights dim and on walks the man himself to rapturous applause and takes a seat on what can only be described as an oversized raised cushion.

The show kicks of with the wonderful “Catch the Wind” which is quickly followed by my all time favourite “Colours.”.

Not everyone gets their top pick, though, because as he says,it’s difficult to please everyone by not playing their ultimate song. He’s not  adverse to requests, however, and apparently he’s been  “Remember The Alamo” from his first album “What’s Bin Did and What’s Bin Hid” .

Not many song are written about King Arthur, but ““Guinevere”  is, and its almost 50 years old too.After the Knights of the Round Table, Donovan goes looking for a Josephine in the audience but comes up short so we have to pretend we have one and as a reward we get the song “Josie”. Although looking for non-existent women makes more sense than the stage chat about his guitar called Kelly, who would only play Scottish or Irish ballads when he got her and how she had to be coaxed to play his older folk songs. Not content with that, he talks about sleeping with his guitars and his previous partner’s jealousy at having to share a bad with them, as you do.

The wonderful “Jennifer Jupiter” is aired, then we get more stories, including one  about Gypsy Dave and a pub called the Cock Inn, which is used an introduction to “To Try for the Sun.”

After a short break the artist returns with the Buffy Sainte- Marie song “The Universal Soldier” a protest song and Donovan says that it wasn’t all fun and games in the 60`s. There was a war going on…..there’s always a war going on.

Again he waxed lyrical in between music, about his upbringing in Glasgow, how a chair was put out for each of the family to sit on in turn and sing. “Young but Growing” came from these memories.  And of course given his links with the Beatles, the Fab Four get a mention too and the time they were all together in India is discussed as a prelude to “Hurdy Gurdy Man.”

There’s time for “Happiness Runs” bfore the only one of his songs that everybody else at MVM might know, and  “Mellow Yellow” finishes the show with everybody on their  feet and dancing and clapping along.

The show finishes with Donovan offering to sign autographs in the foyer and from the queue on the way out, I’m sure it was some time before he got home.

Living legends are few on the ground these days so you should try and get to see one if they are on your doorstep, This one was well worth making the effort for.

Previous article
Anger At The Feds
Next article
A Shore Thing