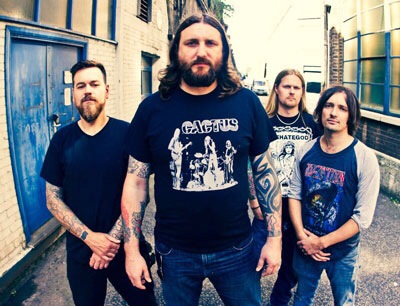 5. Slash (Featuring Myles Kennedy And The Conspirators) World On Fire
This record has two songs on it that could have been song of the year. The title track, which was, and another called “Thirty Years To Life” that it’s not record of the year is because it’s a little too long, with a couple of duff (puns intended) moments. When it’s good it’s phenomenal. And Slash is the coolest man alive, he supports Stoke City too.

4. Machine Head – Bloodstone And Diamonds
Over the last two decades MH and me have had a funny relationship. Their debut is one of my all time favourite records. Then they released a string that didn’t quite do it for me (give or take a few brilliant moments here and there) then they stuck out “The Blackening” and were incredible again. The follow up “Unto The Locust” didn’t grab me though. Then came this. It’s everything modern thrash should be. A band reborn.

3. Crobot – Something Supernatural
Driving home from a gig one Saturday night, I was listening to Planet Rock’s new music show. Wyatt (who shares an exact birth date with me, fact fans) was spinning something by a band we didn’t know called Crobot and holy Christ it was good. Checking em out when I got home I found they were asking for reviews. What was I gonna do? Reviewing this record was a pleasure. If Myles Kennedy fronted Clutch it might sound like this. It doesn’t need to. Crobot do and they are incredible.

2. Order Of Israfel- Wisdom.
One of 2014’s madder releases. This is the brainchild of Tom Sutton, ex Church Of Misery, and it is quite incredible. Heavy, doomy, sprawling, this is a record to lose yourself in for days. As soon as I heard it I fell in love with it, and nothing has changed that infatuation.

1. Orange Goblin – Back From The Abyss
On which Orange Goblin quite simply followed on from 2012’s Eulogy For The Damned and made almost their perfect record. There is Viking metal here, there are glorious, sprawling epics, there are touches of Motörhead and Maiden and everything else in between. “Eulogy …..” was my album of the year two years ago, there was never a doubt this would achieve the same accolade. Stunning.