ALL WHITE, IT’S TIME FOR A RAVE? 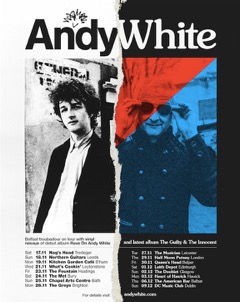 Andy White, Belfast born and Belfast bred, first picked up a guitar when he was thirteen. It was blocking up the hallway. He started strumming it in a beatnik basement belonging to a big bastard called Bobby.

So started the 1986 press release for Andy’s debut album, reissued by Vinyl 180 on October 26th.

The eighties folk revival led by The Pogues, The Waterboys and Hothouse Flowers cut an authentic, soulful swathe through the music culture of the MTV generation. On Rave On, Andy’s voice and lyrics told the story of a boy growing up in the political and social chaos of Northern Ireland and making his way to Thatcher’s Britain with an acoustic guitar and a suitcase full of poetry books, Clash cassettes and Bob Dylan albums.

Originally recorded in a field in County Antrim, this year’s reissue is a limited edition in white 180g vinyl with a gatefold sleeve. It still sounds fresh, raw and urgent today and is complemented by latest album The Guilty &,The Innocent, Andy’s reaction to the current news cycle. Grenfell, Trump, Corbyn, (in)equality and justice are its themes. The six minute title track stunned audiences on his UK tour last year.

You’ve got to hear it.

Along the line connecting these two albums, Andy has collaborated with the likes of Tim Finn and Liam O Maonlai (as ALT), written with Peter Gabriel, recorded with Sinead O’Connor and toured with Van Morrison. But Andy’s voice, trademark lyrical wit and the magic he can conjure up with musicians in a studio remains a constant.

Along with a stellar career in music he’s always kept a firm grip on the “have guitar, will travel” folksinger ethos on display in the back of a Beetle, one West London afternoon in 1986.