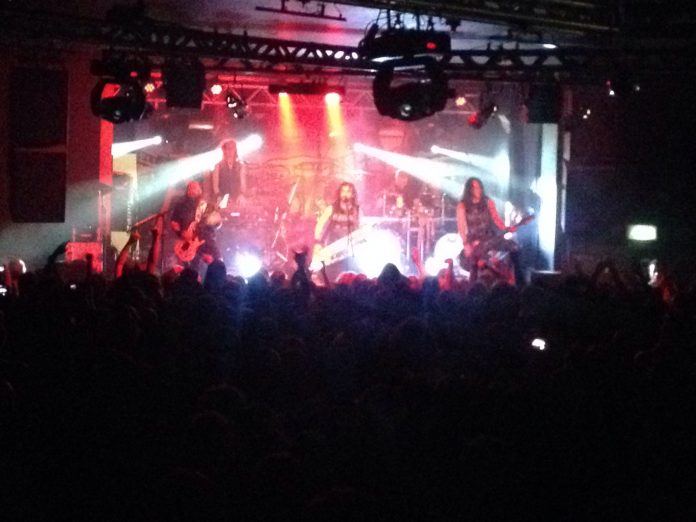 Pirate metal, then. Of all the genres that will get you funny looks off your mates this is the one to get most furrowed burrows. For the uninitiated Pirate Metal sees grown men dress up like something halfway between Captain Jack Sparrow and a pantomime dame and sing songs about plundering bounty. And rum. Always rum. Lots of Rum.

And yet, when you are ready to walk the plank, it’s just good fun. Take Red Rum for example. What makes five fellas and a woman from Nottinghamshire – which with all due respect to the county of residence of a senior member of MVM staff isn’t exactly steeped in naval traditions – sing folk metal sea shanties, god alone knows, but they do. And they do it well. Tongues stay just the right side of cheeks in songs like “Elixir Of Death” and “Rise From The Deep” veer wherever they damn well want to, while singer David Everitt’s occasional guttural flourishes are a welcome twist.

Lagerstein have come all the way from Australia to do this. According to them they’ve done so on the SS Plunderberg. We’ll believe this story – and just about anything else they want to tell us – for two reasons. First they are actually very good, but slightly more importantly is this: in 23 years of gig going we’ve never seen anyone bigger than bass player The Immobilizer. These guys add a fiddle to their mix, but they seem a little angry, perhaps understandable given they were detained at Heathrow and sent back to Dubai before getting here. “Harpoon The Sun” sees them take it out on sunshine, while “Land Of Thundy” is a new track, about rum, naturally, that appears on the forthcoming album “Rum For One, Rum For All” (honestly!). Tracks roll along in as jaunty a fashion as you might expect them too, and here, very much preaching to the converted Lagerstein are a heady brew. Even when they drink beer out of their shoes (no, really….it must be an Aussie thing).

Quite when Alestorm left these shores on a voyage and came back with the full treasure chest in their back pockets is a little hazy. What we do know is the band that opened for Sabaton and Primitai a few years ago and supported Dragonforce a while back, are now riding the highest of high tides. This show is sold out. Just like most of the others they’ve played on this European quest. They’ve done it by staying resolutely true to the Pirate code and they have made not a single concession to any thoughts of anything else (for “anything else” singer Christopher Bowes has Glortyhammer – an absolutely brilliantly barking mad outfit who sing about fake Scottish history). They’ve done it the old way and gradually, as the years and the shows have rolled by, they’ve captured enough crew to become genuine metal stars.

So it is that there is a genuine crackle of anticipation in the changeover of bands. Even M People’s pop bobbins “Search For The Hero” is belted with gusto by the excited throng. To a great many people this is a serious deal.

“Walk The Plank” sees us set sail. Bowes still clutches one of those keyboard-as-guitar things (like the guy out of Level 42 used to on Top Of The Pops, only cooler) and is clad in a kilt as he delivers nuggets of gold like “Sunk’n Norwegian.”

The band have recently released the “Sunset On The Golden Age” record, which is essentially more of the same – only better. “Drink,” from it, which sees them “steal your rum at the point of gun,” is instantly catchy and has already become a crowd favourite, while “Shipwrecked,” which was a highlight of the “Back Through Time” record from 2011 is ludicrously superb. According to Bowes the tale is about Antonio Banderias (he may be drunk). The song is surely the only one in metal history to use the word “banjaxed” with any sort of face, straight or otherwise, but what else did you expect?

Actually, there are a few slight curveballs, “Magnetic North” for example takes the sea shanty format and adds a huge hardcore metal beatdown right in the middle, but elsewhere it’s slightly bonkers music about wenches and mead and surf squid warfare that fill the evening, and yes those are some of the song titles, and yes “Wooden Leg” really was dedicated to Heather Mills-McCartney. If this wasn’t enough, Alestorm are also probably the only band to play a song while the frontman is wearing a sock puppet called Gary Monkey Bastard, but by the time he appears everyone is too wrapped up in things, (or too pissed) to think this is odd. The encore sees things get really strange. The Immobiizer is back, along with a member of Red Rum, for dance pop rubbish “Hangover,” before “Rum” (what else) ends the quest.

If you told the average man in the street what had gone on in here tonight they might think you were making it up. Some might chase you around with butterfly nets and have you locked up for daring to admit to enjoying it. For those that get it, though, shiver me timbers it was superb. This type of piracy is anything but a crime.

Previous article
King King To Tour In 2015
Next article
“We Realised We Were A Classic Rock Band!” Audrey Horne Lift The Lid On Pure Heavy