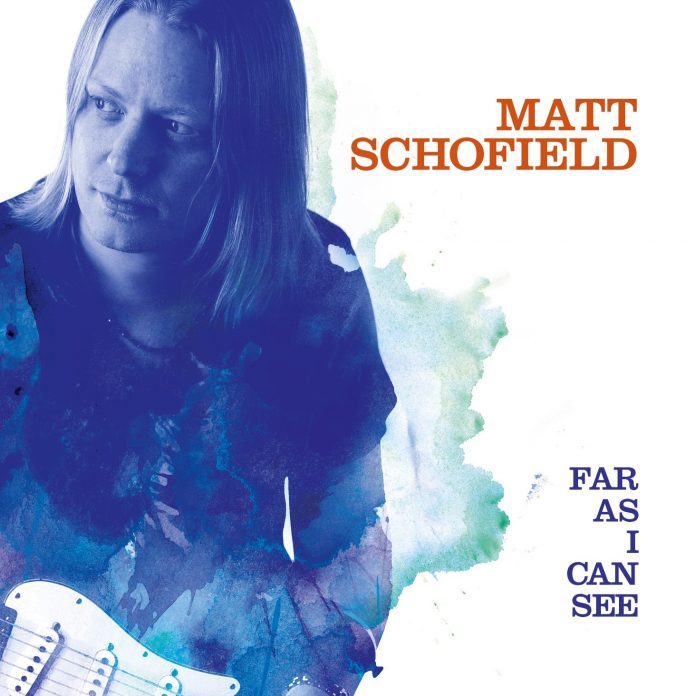 Isn’t it good to know that even in these in uncertain times that there is just one thing to rely on?

Pertinent to this thought is about halfway through this record – Schofield’s fifth – when he and his band are playing Blues standard “Breaking Up Somebody’s Home.” It’s emotion is to the fore, as is the Mancunian’s stunning, yet understated playing. Isn’t it great, you think, that the blues is still the blues and people are still out there making their guitars gently weep.

And yet, peel away at this – and so many other songs on this superb collection – and there is something distinctly different going on.

Schofield has spoken of his desire to translate his live performances into the live setting, so he changed the way he went about recording these tracks, and they do sound a touch more spontaneous than his earlier work, but it’s more than that.

Take, for example, “Hindsight.” Perhaps the standout track here: “Hindsight is always twenty twenty, as far as I can see,” he muses. “But when it comes to you, I can’t see what’s in front of me.” So far, so blues, but the presence here of a brass section has the track rattling along like something in a New Orleans bar – and not some tourist trap either, this belongs in something much more off the beaten track and cooler.

There are quite an array of sounds on “…..See.” It’s almost as though the plan was to try everything and see what worked – only to find it all does, “Yellow Moon” adds a Latin flavour, while the welcome waft of Hammond Organ is all over “Clean Break,” and album opener “From Far Away” is a modern blues classic.

In amongst all this there are not one, but two, epic tracks. “The Day You Left” builds slowly, like its lyric says the idea seems to be to “let it flow.” “Red Dragon” on the other hand, which closes the record down, sees this quite fantastic guitarist cut loose and show everyone just why he’s so highly decorated. The three-time British Blues guitarist of the year is largely content to play within himself on “The More I See,” not here as he gives us his full range. The track is quite brilliant.

There have been many accolades given to this one-time touring partner of Joe Satriani. On this new album, though, he has stretched himself and still managed to come up with something very special indeed. And that is no easy task.