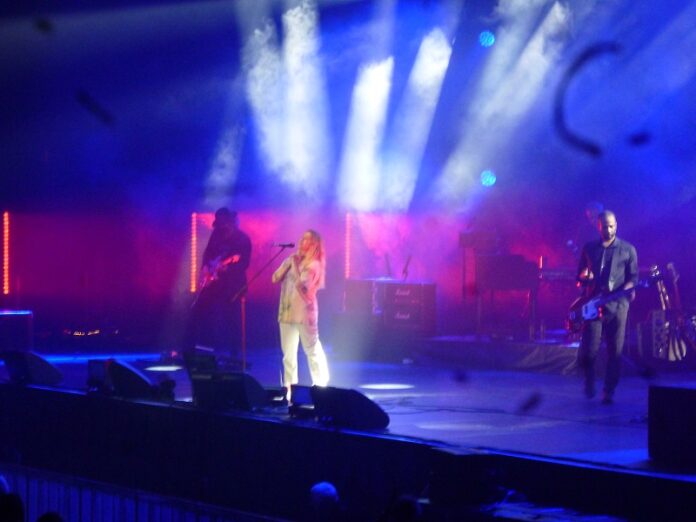 Special guest this evening was Beth Orton, who i`ve been wanting to see since the purchase of her breakout album the twice BRIT award nominated `Trailer Park` in 1996. Something has nearly always cropped up to prevent this but thankfully not tonight. Beth shared a truly captivating forty minutes which included numbers throughout her varied career.

We had the wonderfully dreamy `Pass in Time`, quite intense `Galaxy of Emptiness` and mesmerising `Thinking About Tomorrow`. There seemed to be a warm exchange between the singer and audience and at one stage she was asked to throw a guitar pick or plectrum to a fan near the front. `Stars All Seem to Weep` is quite spellbinding while `She Cries Your  Name` a song written with musician and record producer William Orbit has the crowd alighted. The upbeat `Call Me The Breeze` follows before `Central Reservation` closes out this quite enthralling set.

Beth has a new album `Weather Alive` her first for six years due out in September and she will be back in Birmingham to promote this in October. I for one will hopefully be there as forty minutes wasn`t nearly enough for me tonight.

This tour is named the Jagged Little Pill 25th Anniversary tour but with the worldwide epidemic it arrived in the UK`s second city two years later than planned. I did see this Canadian singer songwriter not long after the release of this landmark album supporting David Bowie at the NEC.

We have a video retrospective of the artist before she arrives on stage and begins with `All I Really Want` from said album before sharing a further three numbers from it with `Hand in My Pocket`, `Right Through You` and `You Learn` which she intercut with a rendition of Happy Birthday for her daughter`s sixth birthday, which fell this day.

The pace is relentless as the singer runs through her back catalogue with songs such as `Hands Clean`, `Forgiven`, `Everything`, `Mary Jane` and `Diagnosis`.

Alanis stalks the stage and offers some more familiar numbers such as `Reasons I Drink`, `So Unsexy`, `Perfect` and `Losing the Plot` before she really ignites this nigh on sold out crowd with `Ironic`.

`Sympathetic Character`, `Smiling` and `I Remain` ring out before the show closes out with a blistering version of `You Oughta Know`. We don`t have to wait long before the band return for a two song encore with the edgy `Uninvited` and `Thank You`.

I have to say you could not fault the energy the artist put into tonight`s performance but i`m not sure if the structure was right as it seemed to ebb and flow. The band were as tight and loud as any rock outfit that has graced this stage. The singer cancelled the next night`s performance in Leeds so maybe she wasn`t one hundred percent fit. Still at times there were real glimpses as to why this singer is still a draw nearly three decades after her ground-breaking album.