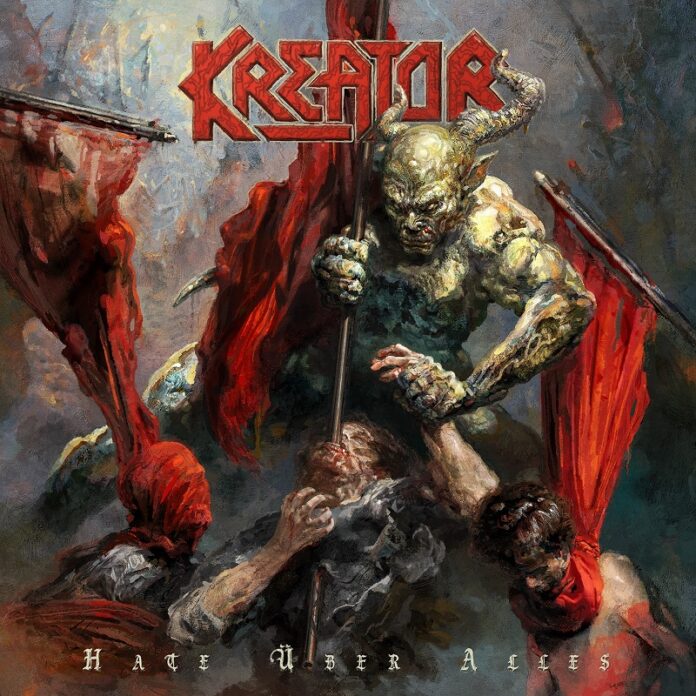 I wasn’t going to start this review like this, but Nuclear Blast sent a supporting interview with Kreator main man Miland ‘Mille’ Petrozza. There’s a bit that struck me. He was discussing the title of his band’s 15th record (“Hate Above All” in its translated form) and said this: “Hate Über Alles” reflects the time we’re living in. Everything is really loud and aggressive. The way we communicate has changed, thanks to social media. It causes a lot of imbalance. The world is in a state of disrepair. Life is not harmonic right now, it’s disharmonic… that’s where I was going with the title.”

All of that is true. But it neglects to say the most obvious thing that comes across from those words. The way we communicate might have changed. Hell, even thrash metal has changed (its all either bands trying to distance themselves from the genre or some kids with hi-tops that are trying to copy some sound of NYC in 1983) but there’s one constant here (or Konstant, if you will) and its this: Kreator haven’t altered their ethos. They (along with others like Testament) are still true to what they believe.

Which is a concept that is basically at the centre of “Hate Uber Alles”. After a bit of a spaghetti western homage “Sergio Corbucci Is Dead” (think of that as the credits rolling in the style of those old films) they get to work with the title song. Petrozza lets out a blood-curdling scream and decides that “hate is the virus of this world”. And with that, its away we go. Strap yourself in, because this is quite the ride.

Make no mistake, for all the anger and prescience of the words, this is as lean and laser guided as any thrash record. “Killer Of Jesus” spits forth, but there’s going to be no bigger moshpit this year. There’s a certain gravitas and grandiosity too. “Crush The Tyrants” with its simple “us against you” message has huge intentions. Plus you’d be better one of us. That’s a given, I think. The Maiden-esque guitar here don’t go unnoticed either.

At its best when its at it’s fastest, “Strongest Of The Strong” has a melody to go with it, “Become Immortal” looks back on their past with pride and when Petrozza shouts “remember when you came from” its tempting to think he means any other thrash band on the planet, “Conquer And Destroy” has a simple message to go with its wall of guitar, but on this and elsewhere the album has a surprise or two. The backing vocals for one are stacked high, but there’s a first on “Midnight Sun” as Sofia Portanent becomes the first woman to sing on a Kreator song. Her contribution is wonderfully disembodied as well.

“Demonic Future” has a little gallop, while “Pride Comes Before A Fall” is (initially at least) a ballad of the most eerie type. There’s a music box that suggests something evil will burst forth, while what does is one more thrash beauty.

The last one is special. It’s the longest but it’s the first song that new bassist Freddie LeClerc has contributed towards. You suspect it won’t be the last co-write the ex-Dragonforce man gets. He certainly brings something different here, for sure.

We began with a quote from the interview, so we may as well end with one, given that “Mille” also said this: “Why put out meaningless, boring albums? I’d rather build on the essence of what I’m trying to say and what I want people to feel. That’s why we sound so angry and edgy.” He’s basically nailed it, so we’ll just add some hyperbole as we always try to. Except this isn’t. This is the stone cold truth: “Hate Über Alles” is the best thrash album in years.