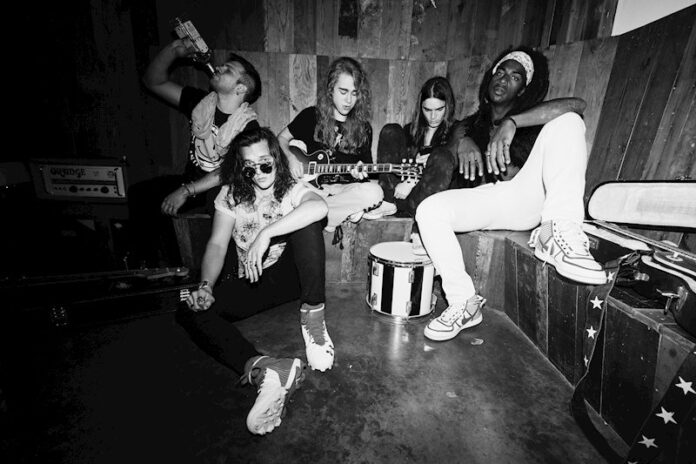 It’s been a big year for rock music’s most exciting debut of 2022, Classless Act, and the band has one final treat in store, today releasing the Welcome To The Acoustic Show EP alongside the full collection of in-studio music videos.

Featuring five tracks total, it gives listeners a different, unplugged take on the amped up, energetic anthems that make up the band’s acclaimed album, Welcome To The Show that was released June 24 via Better Noise Music and already racked up more than 2.8 million streams.

Since October 21, Classless Act has released a new acoustic track every two weeks culminating in today’s final addition to the series, “Storm Before The Calm.”

Hear the acoustic version of “Storm Before The Calm” HERE

Previous acoustic singles released included “Classless Act,” “This Is For You,” “Time To Bleed” and “All That We Are.” As of today, all five tracks are now collected in the Welcome To The Acoustic Show EP, available on all DSPs, alongside in-studio music videos available on YouTube.

Recorded live at Sunset Sound, with no overdubs, the new takes hone in on the talent of frontman Derek Day and the musicianship of the talented-beyond-their-young-years ensemble that includes Dane Pieper (guitar), Griffin Tucker (guitar), Franco Gravante (bass), and Chuck McKissock (drums). Gravante personally mixed the acoustic tracks himself.

Hear the entire Welcome To The Acoustic Show EP HERE

See all the in-studio videos HERE

Classless Act is currently on the road for “The Most Wonderful Tour of the Year” with dates supporting Billboard chart toppers Giovannie & The Hired Guns as well as headlining concerts that will see the band wrapping up the year with two shows in their home state of California.  Classless Act’s New Year’s Eve show will mark their 100th concert this year since they hit the road with Dorothy on the “Gifts From the Holy Ghost tour back, on March 22.  Tickets are on sale now at https://classlessact.com/#tour.

Classless Act singer Derek Day also recently appeared at the Taylor Hawkins Tribute Concert at L.A.’s Kia Forum on Sept. 27 where Day joined Dave Grohl and members of the Foo Fighters as well as Motley Crue for a special two-song set. He was personally recommended for a spot on the all-star lineup by The Darkness’ Justin Hawkins who also appears on the Classless Act track, “This Is For You.”

Upon Welcome To The Show’s release on June 24, Classless Act immediately garnered critical acclaim with press hailing them as “the next big thing in music” (Next Mosh) and “very reminiscent of when rock reigned supreme” (Loudwire). The Rock Pit declared the songs on the album “break like Queen used to so well into flamboyant guitar [with] Supertramp meets Muse aplomb,” and New Noise also said it’s a record “that feels most easily summed up as ‘powerful'” from “a new-ish band who sound like the greatest hits of ’70s and ’80s rock eras, with a grace and vibe that’s more modern.”