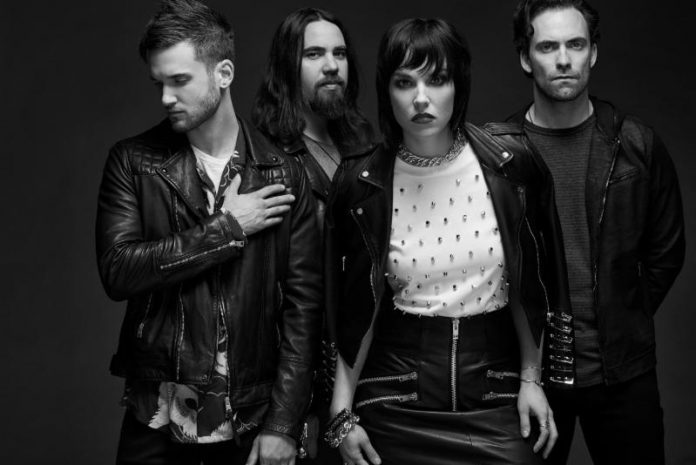 November 21, 2018
Reading time: 4 min.
Facebook
Twitter
Pinterest
WhatsApp
Linkedin
Email
Print
Telegram
Copy URL
By Andy Thorley
Having sold out every date on their last UK headline tour, Grammy-winning US rockers Halestorm are delighted to announce their return to the UK for even bigger shows in November 2019, supporting acclaimed new album ‘Vicious’.
The Nashville-based band will be extending their landmark US headline tour, championing women in rock. The all female-led tour features very special guests In This Moment, with New Years Day opening proceedings each night.
Halestorm said, “Hey UK freaks! You begged for it…and now we are coming for you! Along with our mates in In This Moment and New Years Day, we are super excited to bring this Vicious tour to the UK! This is history in the making, and The Event you don’t wanna miss! Come rock with us!”
When the US tour kicked off, Halestorm’s Lzzy Hale commented, “We’ve been wanting to put together a tour like this for a long time. We are some of the hardest working women in rock, so the fact that we are all on the same stage every night is something not to be missed! We support and love each other, and we are representing our genre. This lineup is a beautiful display of what it means to be a strong female example for rock fans everywhere.”  In This Moment frontwoman Maria Brink agreed, stating “I am very excited about being a part of such an empowering, divine, female-fronted tour. It is very rare in rock music to have a movement like this and the timing couldn’t be more perfect. Let the Amazons rise!”
On extending the run to the UK, New Years Day add, “Every single photo we have ever posted about being on tour with Halestorm and In This Moment, was always flooded with comments of people asking us to bring this same tour to the UK. And now we are!!!! We are so excited to bring our show to more faces and ears and get to meet everyone around the world who wants to head bang with the women of rock!” Maria Brink concludes, “We have fallen in love with the UK and Europe and feel so blessed to be back again. Bringing this empowering and beautiful tour over is going to be very special!  See you all soon!”
Dates line up as follows:
Sun 24th Nov – GLASGOW Hydro (tickets from: https://www.ticketmaster.co.uk/Halestorm-tickets/artist/708988)
Mon 25th Nov – NOTTINGHAM Motorpoint Arena (https://www.livenation.co.uk/artist/halestorm-tickets)
Wed 27th Nov – CARDIFF Motorpoint Arena (https://www.livenation.co.uk/artist/halestorm-tickets)
Thu 28th Nov – LONDON Alexandra Palace (https://www.livenation.co.uk/artist/halestorm-tickets)
Ticket pre-sales begin from 10am on Wednesday 21st November 2018. General on sale starts at 10am on Friday 23rd November 2018. For more ticket information, VIP packages, and details on joining the Official Halestorm Fan Club, please seewww.halestormrocks.com.
Last month, Halestorm released a special Halloween-inspired video for new track ‘Do Not Disturb’, taken from latest album ‘Vicious’.  The video was directed by Roboshobo (Ghost’s “Rats” video) and has already clocked up over 1.2 million views. Watch it at:
Produced by Nick Raskulinecz, ‘Vicious’ debuted at #8 on the U.S. Billboard 200 and main U.K. Album Chart (as well as #1 on the U.S. Top Rock Album and Hard Music Album Charts & #1 on the U.K. Top Rock & Metal Album Chart).
Previous article
THE SOUND OF SIRENS
Next article
LIVE CREAM