They came from Venus to destroy the cities.  VALIENT THORR is a wild ass Rock N Roll band said to hail from inside of the planet Venus. Since crash landing on Earth in the year 2000, they’ve played well over 1500 shows all over the world. They’ve toured with visionaries from Motörhead and Joan Jett to contemporary heroes like Mastodon, Gogol Bordello, and Clutch.  Since 2005 they have put out six full-length records and two seven inches! And just so you don’t think we’re blowing smoke, look them up! This is only the cusp of the feats of greatness this hard working, sweat drenched band has accomplished!

Today the aliens can confirm a July 29th release date for their Napalm Records debut and seventh full-length release.   Old Salt is the highly anticipated follow up to 2013’s Our Own Masters.   Additional details including album art and track listing have been revealed as well.

VALIENT Himself commented on the new album:
“Old Salt wouldn’t have happened if it wasn’t for Eidan Thorr. He helmed this beast & put the wheels in motion. What is it about? If you ask me it’s about stepping into the future as an artist while trying to anticipate what comes next using that old man logic that comes with age- that no one ever tells you about until it’s time to say “if I’d known then what I know now”. All the best old storytellers aren’t just weaving you yarns. They are recounting from experiences. And believe me, we’ve had plenty of those in the last few years.”

In support Old Salt, VALIENT THORR will be hitting the road in North American on the “15 Years on Earth Tour”.  Joining them on the road will be Pears, Black Wizard and label-mates Hammer Fight.  The tour kicks off May 25th in Asheville, NC and runs through July 13th in Baltimore, MD. 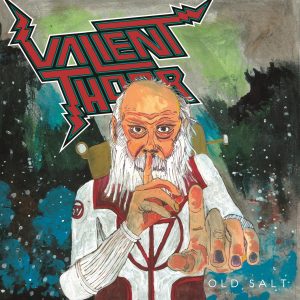