NECROCOSM was born of fire in chaos during the bleakest period of the year 2011. Three remaining members from a deceased project decided to embrace their dark inspiration and craft music in a new sinister direction. Formation of the circle was complete in 2012. 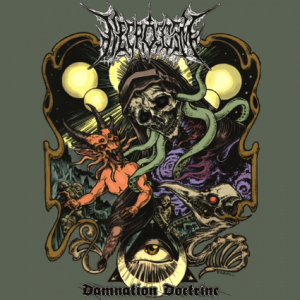 Many beers were had, copious heads were banged, and much blood was spilled, as the dark assembly forged this new sonic beast in the crucible of Raleigh, NC. USA. NECROCOSM is your shadow in the darkness, your cruel reminder that your time is short and death always prevails. Positivism never being our strong-suit, the growled, grunted, and shrieked lyrical themes are the darkened horizon obliterating all hope, devastating guitar riffs and solos melt more faces than the ark of the covenant, the inhuman drumming annihilates your empty fractured skull, and the grinding bass is guaranteed to evacuate your bowels. We are gaining ground slowly but surely, promising to infect the ears and minds of our audience and remind them of the haunting darkness that awaits us all in the end. There is no eternal life in paradise or damnation in hell. Only the dreadful quiet of the eternal void.