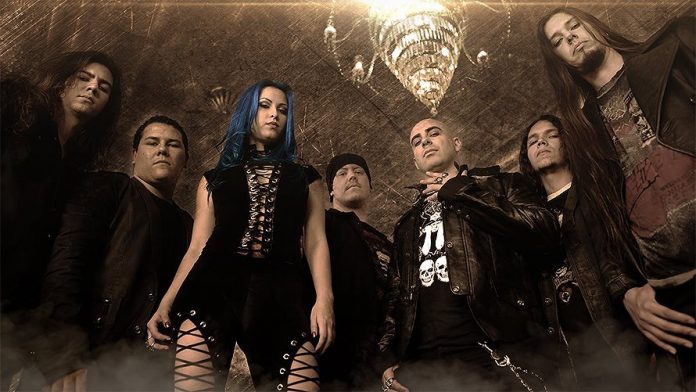 Hailing from humble beginnings in Curtibia, Brazil, Semblant has found a huge audience throughout North and South America, Europe and beyond with their brand of dark, progressive, gothic Metal, highlighted by the dual vocals of Mizuho Lin and Sergio Mazul.

Being compared to acts ranging from Nightwish to Lacuna Coil to Evanescence,SEMBLANT, vocalists Mizuho Lin and Sergio Mazul, guitarists Juliano Ribeiro and Sol Perez, keyboardist J. Augusto, and drummer Welyntom “Thor” Sikora has found huge success with their independent release Lunar Manifesto,__ with the video for “What Lies Ahead” reaching over 2 million views on Youtube this week,

As well as follow up “Dark of the Day” nearing 500,000 https://www.youtube.com/watch?v=AamdEYGZwFA.

Says EMP A&R and Operations Director Thom Hazaert, who discovered and signed the band to EMP, “When I first stumbled onto Semblant, like most of the World, on Youtube, I was instantly struck by (female vocalist) Mizuho (Lin), and how interesting the band was. Numbers don’t lie, and I watched the video shoot from a million views to almost 2 million inside of a month. So, I did a little more homework and found out some more about them. Literally a week later, through a random introduction from one of my A&R assistants, I met the band, and the owner of their previous label who was looking for a new home for them.” He adds, “At that point, the universe worked its magic, and before you know it, we were in serious talks to bring the band over to EMP.”

Says Ellefson, “I can’t say how excited we are that we were able to find such an incredible band, who has already found huge success on their own, and to be able to get involved and take it to the next level. Discovering and nurturing bands like this is the reason why I started this label, and why myself and Thom have developed it the way we have. It is already becoming a great cannon for promising artists, andSemblant absolutely fit the bill.” Ellefson adds, “And the way we found them, with the band being from Brazil, just makes it that much cooler. There has always been a strong Metal culture in Brazil, which is really emerging now internationally with bands like Angra, Semblant, Machinage etc., and we were so blessed to be able to pick up one of their most promising exports.”

The band will tour the US in June, with a planned 7/8 release date for Lunar Manifesto, which will be released in CD and limited edition LP formats.