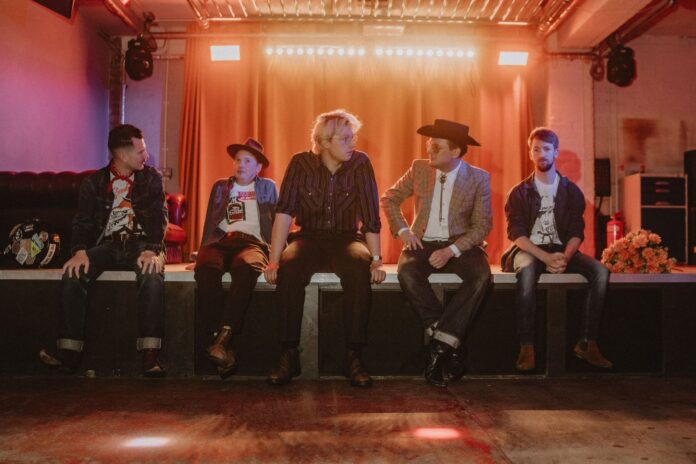 Rob Heron & The Tea Pad Orchestra announce their fifth album, The Party’s Over, to be released on Tea Pad Recordings on September 30. The first single, with accompanying video, available now, is sax-fuelled R&B stomper ‘She Hypnotised Me’.

As people have come to expect with Tea Pad albums, The Party’s Over builds on their signature sound, a heady blend of Western swing, blues, country, rock & roll and soul, while adding new flavours – there’s a lot more brass, for example, particularly on the New Orleans-flavoured ‘The Doctor Told Me’.

The Tea Pad work fast: The Party’s Over was written between January and May this year, rehearsed in one afternoon and recorded over three days. Guests include Ben Powling (Viper Time, Howlin’ Ric & The Rocketeers), Ruth Lyon(Holy Moly & The Crackers) and the House Of The Black Gardenia brass section on ‘The Doctor Told Me’.

After more than a decade drinking and carrying on across Newcastle and beyond, The Party’s Over sees the band facing up to getting older, feeling the world – and their lives – change, for better or worse, and trying not to be the last one out of the door as the Sunday morning sun hurts their eyes.

Rob Heron & The Tea Pad Orchestra have been gleefully trampling over genre boundaries for over a decade now, chucking Western swing, blues, country, rock & roll, soul and more into their musical gumbo, but always sounding mostly just like themselves.

Based in Newcastle but hailing from across the UK, the Tea Pad have released four albums before their new The Party’s Over set, touring across the British Isles and Europe, playing everywhere from Glastonbury and Cambridge Folk Festival to village halls and barns, and all points in between. They’ve played support tours with big-name Americana outfits such as Pokey LaFarge, The Dead South, and Sierra Ferrell, released music on German label Migraine Records, appeared three times on BBC Radio 4’s Loose Ends, and had their music played by everyone from Marc Riley to Huey Morgan.

Across their four previous studio albums, 2012’s Money Isn’t Everything, 2014’s Talk About The Weather, 2016’s Something Blue and 2019’s Soul Of My City , the band are constantly adding new flavours to their sound: Heron in particular is a vinyl obsessive, fired up about some new passion – calypso or boogaloo or whatever this week brings – but mostly enthusing about obscure blues and country 45s, and that eclecticism and search for new sounds often feeds into their songs.

Their fifth studio album, The Party’s Over, takes their signature blend of classic country and rhythm and blues to a new level. After a decade of honing their craft, this might just be their best album to date!