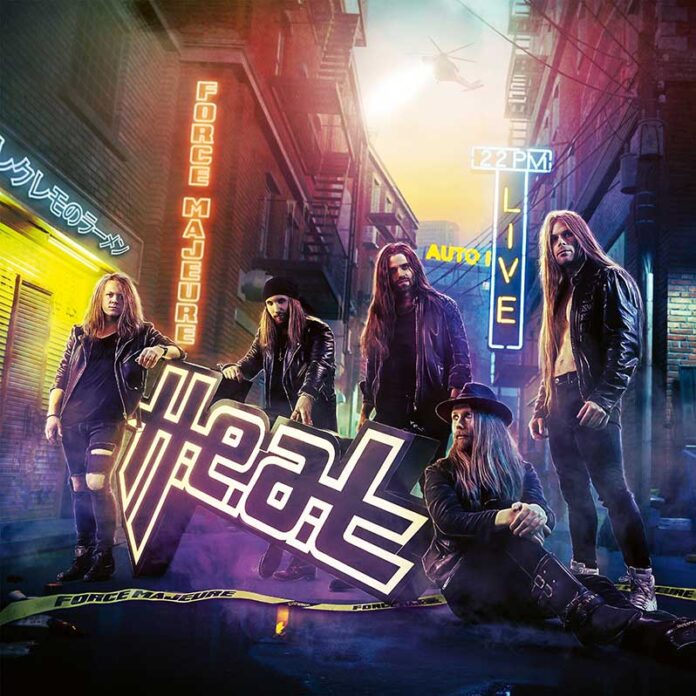 “No one can save me, the damage is done.” I am sure we’ve heard that line somewhere before, right? All Bon Jovi-isms aside mind you,  the important thing is who is singing those words on “Force Majeure”.

Kenny Leckremo is back. He’d been the singer on the first couple of H.E.A.T albums, before leaving and being replaced by Erik Grönwall. Now the latter has disappeared to be the new boy in Skid Row, they went back to their roots.

They’d done this before, of course, when guitarist Dave Dalone did the hokey-cokey a few years back, so now getting the old band back together seems to be what H.E.A.T do

This one is significant too, because Leckremo has called it a “shot at redemption”, but given the last one was called “H.E.A.T II” it almost feels like “….Majeure” is a third rebirth.

On my review of that last one, I wrote: “Starting all over again? Maybe. It is also, hands down, the best record H.E.A.T have ever done.”. This record, to be fair, has a different vibe (if the last one was an 80s glam rocker, then this is pomp and roll – with a bit of US stadium stuff added for grins).

Quite frankly everything on this sounds huge. Like old school Europe big. I’d contend that AOR hasn’t been this sized and this unashamed since Nelson and “After The Rain”. “Back To The Rhythm” shakes the foundations. It’s not bothered for trends. It’s not bothered that hard rock isn’t meant to be overblown anymore. It is doing what it wants.

“Nationwide” riffs like its 1982, and it dares Saxon to call it out, and “Tainted Blood” is for people that think Def Leppard’s “Hysteria” record was a bit sparse. In short, if you called this “pompous” then everyone here would say “thanks very much”.

“Hollywood” makes clear its aims. It’s sort of sleazy, but it would have got its kicks at the Rainbow rather than the Cathouse. Jona Tee parps away on the keys everywhere, but the way he ensures a gear change on “Harder To Breathe” is his best moment.

Indeed, for all that it would be tempting in normal circumstances to call this “dated” then it doesn’t sound like that here. Instead, the likes of “Not For Sale” are gleaming like diamonds and fresh as daisies. Why? Well, lets hypothesise for a second. And my guess is it’s because H.E.A.T mean it. There’s nothing fake here. This is them. Balls out. Rocking out. Totally authentically.

There was always going to be a power ballad. “One Of Us” – built around a Tee piano riff – is that. And a bag of chips. Because this doesn’t stop at just balladry. No, this carries on until you might well be listening to a Swedish entry for the Eurovision.

“Hold Your Fire” is a little bit different. There’s a sleaze in the groove, a funky thought in the bass. Then it morphs into an arena rock song from 1986. This could have cheerfully have been on a Danger Danger record, it really could.

Just in case you’d missed the point that this is basically a power metal band in gam rock clothes, then “Paramount” out Hammerfall’s Hammerfall as it were, and if “Demon Eyes” is the one that pilfers “You Give Love A Bad Name’s” lyrics, then its actually one of the fastest and heaviest tunes here.

“Wings Of Aeroplane” manages to pull off the trick of sounding epic and being less than four minutes long all at once, and it shines with an absolute love of their craft, and their excitement at being back ready for stages is clear.

I am reminded of the line in Frasier that I’ve used before. One of the main characters enquires as to whether the star had heard the phrase “less is more.” The reply comes: “yes but if less is more, then just think how much more, more could be.” “Force Majeure” is that record. You’ll love it, you’ll hate it. There’ll be no in-between. What’s even clearer is that H.E.A.T will care not a jot either way, because, essentially, they’ve made their profound statement.