THE POWER OF TERROR 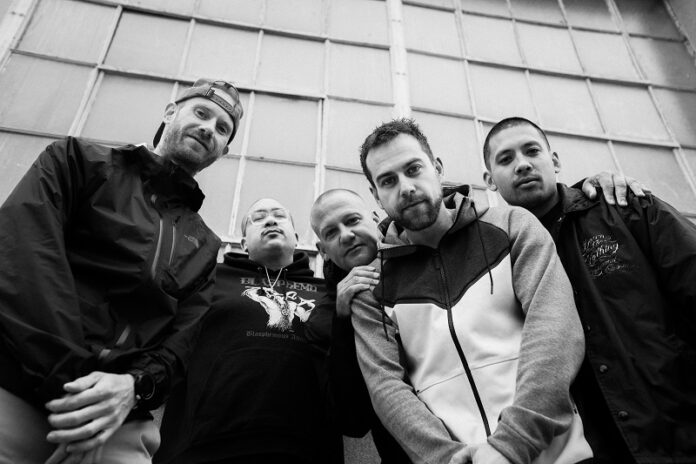 End Hits Records and influential hardcore band Terror are excited to announce the Friday, May 6th, 2022 release of the band’s brand new studio album, Pain Into Power (pre-order HERE). For two decades Terror have been relentless. The band has achieved a kind of longevity that’s exceedingly rare, managing to stay both consistently active and consistently ferocious – a feet that’s taken them from their underground roots to being one of the most legendary groups in hardcore. Now on their eighth studio album, Pain Into Power, the band have bridged the gap between their past and present, with original guitarist Todd Jones returning to the fold to produce an extraordinarily visceral record that proves Terror’s future is looking as fast, heavy, and aggressive as ever.

To mark the announcement, the band have released new single, ‘Can’t Help But Hate’, featuring a guest appearance from George “Corpsegrinder” Fisher of Cannibal Corpse.

For two decades Terror have been relentless. The band has achieved a kind of longevity that’s exceedingly rare, managing to stay both consistently active and consistently ferocious–a feet that’s taken them from their underground roots to being one of the most legendary groups in hardcore. Now on their eighth studio album, Pain Into Power, the band have bridged the gap between their past and present, with original guitarist Todd Jones returning to the fold to produce an extraordinarily visceral record that proves Terror’s future is looking as fast, heavy, and aggressive as ever.

Terror–whose current lineup is made up of vocalist Scott Vogel, drummer Nick Jett, guitarists Martin Stewart and Jordan Posner, and bassist Chris Linkovich–were founded in 2002 by Vogel, Jett, and Jones, with the latter leaving the band a few years later and eventually forming the brutal hardcore-by-way-of-death-metal outfit, Nails. When the world was put on hold at the start of 2020, Vogel reached out to Jones about the idea of working on a project. They began writing songs together again and quickly found their old creative chemistry was more than intact. Terror and Jones marked the moment with 2021’s Trapped In A World, a live-in-the-studio rerecording of songs from the band’s earliest releases, and the experience was so satisfying that the team soon turned their attention to making a brand new Terror album.

With Jones at the production helm and Matt Hyde engineering/mixing (whose previous work includes Terror’s landmark album Keepers of The Faith, as well as releases from The Deftones, Slayer, Hatebreed, and more), the band convened at Jett’s Jet To Mars Studio with the goal of making an album that captures the unhinged kinetic energy of Terror’s earlier work filtered through 20 years of seasoned musicianship. “Todd’s whole approach to, and vision for, this record was to make it just full-on aggression from the minute it starts to the minute it ends,” Vogel explains. “That goes back to our first EP, Lowest Of The Low, which Todd was writing on. This album is maybe even more turned-up, even faster, even more abrasive. Terror post-Todd has stayed the course along that aggressive, hard-hitting, fast, in-your-face hardcore that doesn’t stray from the path too much–but he really wanted this one to be straight insanity that doesn’t let up.”

And it doesn’t. Clocking in at a lean 20 minutes, Pain Into Power is Terror boiled down to their most primal and effective state. The title track and opener offers the perfect introduction, just 53 seconds of crushing hardcore that demonstrates the band’s unparalleled intensity and the undeniable spark in their work with Jones. “I obviously know Terror,” says Vogel, “but this album still hit me harder than I expected. When people listen to this album, I hope they think ‘this is Terror, but this is the Terror record I was hoping for and needed,’ and it hits them harder than we’ve hit them before.”

The pummeling sound isn’t the only source of fury found on Pain Into Power. Whereas in the past Vogel’s lyrics have often pushed through darkness to channel a sense of positivity, the vocalist found that sentiment to be in shorter supply. “We’ve always walked that line between positivity and negativity,” Vogel says. “Songs that are pure anger and songs that say ‘the world’s a shitty place but you’ve got the inner strength–and maybe this music and this scene–to help you through it.’ But a lot of these new songs are very angry and dark. I’ve tried my best to stay positive but, with this vibe of unrelenting musical destruction, it was a little bit harder to bring out that positive side.”

But Pain Into Power doesn’t lack Terror’s unstoppable sense of defiance. Amidst all of the personal and societal bleakness addressed on the album, there’s also resilience. “On The Verge of Violence” takes a hard look at the overwhelming issues of addiction, violence, and prejudice that permeate the country, while elsewhere “Outside The Lies” acts as a rejection of the corrupt institutions that exacerbate them; the former offering a chorus as memorable as it is vicious and the latter a 45-second blastbeat-to-breakdown stomper. On “Unashamed,” Vogel reaffirms his lifelong devotion to hardcore and the sense of community and solidarity he found within it. The song fittingly includes guest vocals from Year of The Knife’s Madison Watkins and Initiate’s Crystal Pak, two of modern hardcore’s most exciting new bands. Another album highlight, “Can’t Help But Hate,” features a guttural appearance from Cannibal Corpse vocalist George “Corpsegrinder” Fisher, making his colossal presence felt amongst the frenzied music. The album’s guest vocalists highlight Terror’s unique ability to draw a line between different eras and styles of aggressive music. It’s an example of the genuine dedication to both platforming new groups and fostering an appreciation for the greats that has allowed Terror to connect with longtime fans and new listeners alike for so many years. “Genuinely loving hardcore and what it’s all about is important,” Vogel says. “It keeps us in touch and wanting to stay involved in the current climate and stay engaged with the younger bands and the vibe they bring to the scene.”

The final guest vocal appearance on Pain Into Power comes from Jones himself, who puts his roaring stamp on late album standout “The Hardest Truth.” It’s a full circle moment that brings the band’s history into lockstep with their relentless drive to move forward. Where many bands would be content to rest on a well-earned legacy, Terror have kept pushing themselves while also staying one hundred percent true to who they are, who they’ve always been, and who they’ll always be. Even after 20 years, Terror’s thirst for riffs, self-expression, and stage dives remains unquenched, or at Vogel succinctly puts it: “I want kids to connect with the lyrics because they know they’re coming from a genuine person, and I want them to get floored by the music so that when they see us play live they can’t help but jump off someone’s head.”