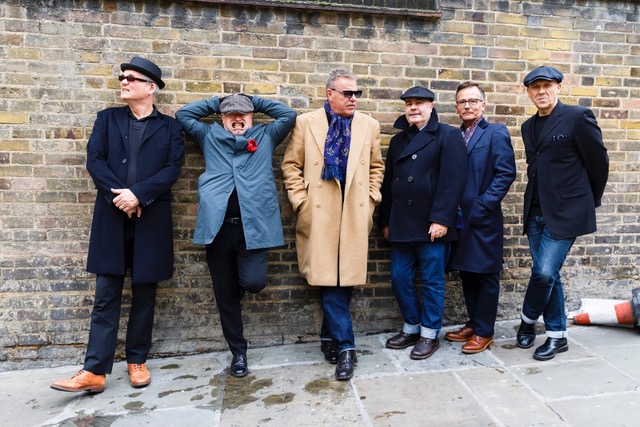 As MADNESS limber-up for their major outdoor appearance at Shrewsbury’s The Quarry this Summer, today they are very pleased to confirm two very special guests who will be joining them at the event…
Two of the most successful acts to have emerged from the UK in the last two decades, THE ZUTONS and HOOSIERS will be performing supporting sets at the Friday 15th July fixture.
Rocketing out of Liverpool’s trailblazing scene of the early noughties, The Zutons released their infamous debut album, ‘Who Killed…… The Zutons?’ in 2004 and would go on to win the hearts of the nation with a string of sax-inflected indie floorfillers like “Pressure Point”, “You Will You Won’t”, and “Confusion”. Releasing their Stephen Street-produced follow-up in 2006, ‘Tired of Hanging Around’, the album would go straight in at No.2 in the charts, with lead single “Why Won’t You Give Me Your Love?” and of course “Valerie” (later famously covered by Mark Ronson and Amy Winehouse) both charting at No.9 and imprinting themselves as modern classics on the public consciousness.

Meanwhile on the other side of the Atlantic, Irwin Sparkes (lead vocals, lead guitar) and Alan Sharland (drums, percussion, vocals) were sowing the seeds for their own successes as the Hoosiers. Hailing from Somerset but formed in Indianapolis in 2003, the pairing would go on to find instant fame with the landmark first single “Worried About Ray” which went straight in at No. 5 upon release in 2007. Releasing their acclaimed debut album later that year ‘The Trick to Life’, the record seized the prestigious No.1 slot in the UK charts and launched them on a whirlwind career in pop from then on, releasing 5 further albums including the top ten ‘The Illusion of Safety’ (2010) and a ‘Greatest Hits’ compilation in 2019.
Adding their own contemporary classics to an evening which already promises to be packed with pop hits, The Zutons and Hoosiers will be paving the way for an unmissable set from: Madness, in what will be their first-ever Shrewsbury headline performance.
Speaking about the upcoming Shrewsbury show, Madness say:
“We hear there is real magic in the waters of the River Severn and we can’t wait for it to work  on us and all the Madheads that come and see us at The Quarry this summer…Bring it on.”
Taking place in one of the region’s most unique spaces, The Quarry Park event will be set amidst 29 acres of lush parkland and encircled by the majestic loop of the river Severn.
Promising an evening stacked with some of the finest sounds around, tickets for Madness, plus very special guests The Zutons and Hoosiers are on sale now.

Madness are perhaps one of the most prominent and best-loved bands of the last 50 years. Formed in Camden Town, London in 1976, their journey since has taken them from ska-band upstarts to globally acclaimed superstars. Finding initial success in the late 1970s and early ’80s as frontrunners of the 2 Tone Ska revival, the band would soon go on to find universal fame through a string of 15 UK Top 10 charting singles, with their crowning glory the seminal UK No.1 “House Of Fun”.
With a trademark “nutty” sound and lyrics that capture the very essence of British life, cuts like “Baggy Trousers”, “One Step Beyond”, “Embarrassment”, “My Girl”, “Driving In My Car”, and “Our House” and countless others have transcended the generations and immortalised Madness as icons of popular culture.
A testament to their enduring popularity, Suggs and co. were invited to perform on top of Buckingham Palace as part of the Queen’s Jubilee celebrations AND the London Olympics in 2012 to a global audience, while also setting the record for the biggest-ever viewing for the BBC’s live New Year’s Eve broadcast in 2018.
Celebrating the 40th Anniversary of their landmark debut album ‘One Step Beyond’ last year, Madness remain one of the most exhilarating and entertaining prospects on record and the stage.
With a huge headline show at Shrewsbury’s The Quarry now on the agenda for Summer 2022, expect the finest music and plenty of madcap mayhem when the original “Nutty Boys” go one step beyond to make this an evening for the ages.