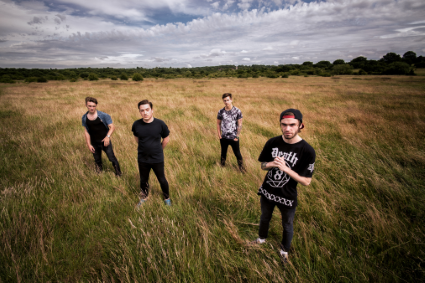 London quartet ‘Zephyr’ release their hugely engulfing debut EP ‘An Odyssey For The Living’ through all digital platforms on Friday 9thOctober.

Drawing favourable comparisons to Children of Bodom, While She Sleeps and Born of Osiris, through to ambient artists such as Carbon Based Lifeforms, Zephyr express a sound that pulls from the elements of deathcore and metalcore, while intriguingly integrating prominent atmospheric passage to stunning effect.

Freshly formed in the nation’s capital and featuring Cameron Alexander Thomson (Vocals), Gideon Waxman (Drums), Jacob Gudge (Guitar) and Attila Tashi (Bass), Zephyr are already making waves. After the fast-moving foursome released their debut video single ‘The High Road’ earlier this year, the cut soon went viral and boosted the band’s profile, in turn ushering them to a flurry of successful shows. The highly talented metal chiefs then went straight to their lair in the Spring, practicing and penning, and consequently nailing down five slabs of captivating progressive metal (recorded by Kelly Pinchin and Ollie Dow from In Archives and produced by Julian Rodriguez from Elitist) to form their stunning debut record.

Zephyr are now set to push the envelope with the release of their debut five track EP ‘An Odyssey For The Living’. The record is a colossal bench mark for the Londoners, and it delivers on all fronts. The barbarous beatings and eerie passages of ‘Familiar Spirit’ wrap themselves around your ears, while the visceral guitar work and instrumentation of ‘Little Lamplight’ clearly demonstrate the foursome’s huge proficiency for crafting engaging melody. The fiery punch of ‘Black Luster’ is another key highlight from this stunning debut EP, as it further drives the message home that Zephyr are in the spotlight.