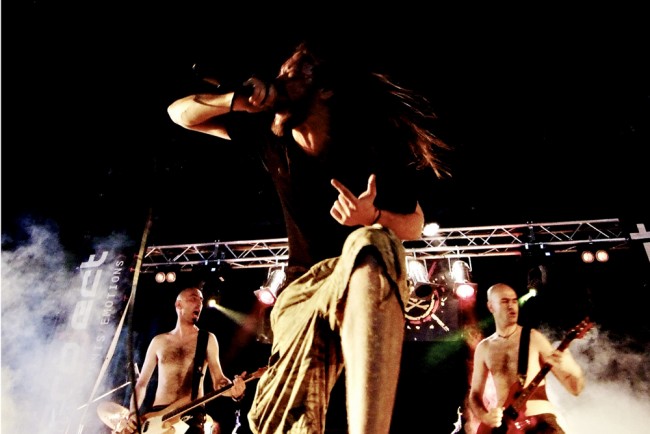 Italian veterans release new video – and we time it for 6.30. Clever huh?!

The song “06:30 The Alarm” is a outtake from work-themed album “Nazienda” out on September 25th on Mighty Music (Denmark).

In the video, actor Roberto Marinelli is subjected to a brutal awakening treatment by members of Resurrecturis who chase him and scream at him during the early morning preparation before going to work!

“For sure the video is pretty funny and ironic, but is built upon a bitter reflection on today’s suffocatingly tightening time use schedules and the ever increasing stress at work… Preoccupations don’t leave us even in the privacy of our bedroom or in the toilet!”

“The song 06:30 The Alarm occupies an important position in the economy of Resurrecturis’ Nazienda since it marks the abrupt transition from the comfort we experience at home with our dears to the stress-filled time of the working day.

“Significantly the lyrics end saying The working day has begun, and it is pretty crazy since the character is still in the stairs at home, but his mind is already filled by anxiety.” (Carlo Strappa / Resurrecturis)

Resurrecturis began in Italy in 1990 and has been around in some form ever since.

During the course of its history the band has released 3 full-length albums, plus demos, mcd’s, ep’s and has toured/played with the likes of Master, Impaled Nazarene, Vital Remains, Dismember, Macabre, etc.

“06:30 The Alarm” is the second anticipation of Resurrecturis’ “Nazienda” following the lyric video for “Two Half Lives Don’t Make One”  that was released about two months ago.