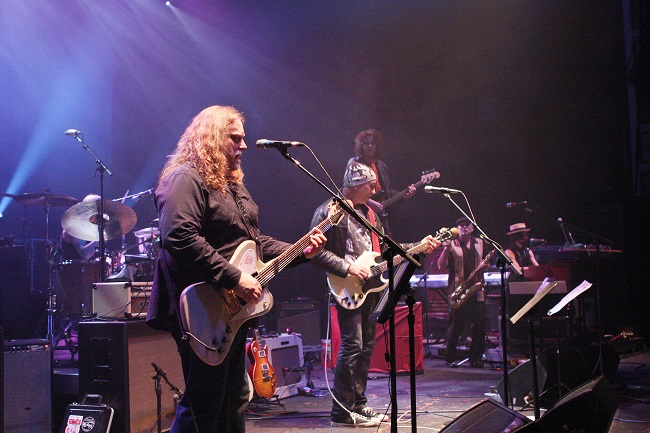 Few bands have a reputation for making music as consistently honest, organic, and daring as Gov’t Mule. But in curveball mode, and for the first time in its 20-year career, Gov’t Mule has delved into its vaults for Stoned Side Of The Mule (Vol 1 & 2).

Rock torchbearers Gov’t Mule are celebrating their 20th anniversary with an extensive tour and a series of dynamic live archival releases that highlight the group’s versatility and epic, fearless live performances. No two Gov’t Mule shows are alike, as the band draws on the more than 300 songs in their repertoire (and often a host of special guests) to create a unique experience each and every time. Their steadily expanding fan base knows that the Mule always has something special waiting for them. Expect the unexpected.

The deep chemistry and steely confidence shared by the quartet allow them to tackle any form of music and stamp it their own while remaining true to the spirit and intent of the original. This can of course be heard any time guitarist-singer Warren Haynes, drummer Matt Abts, bassist Jorgen Carlsson and multi-instrumentalist Danny Louis take the stage, but a series of new live archival releases really drives the point home.

After last December’s Dark Side of the Mule, January’s Sco-Mule, and Dub Side of the Mule (released April 6th) the fourth and last release in this series will arrive on April 20th. Stoned Side Of The Mule (Vol 1 & 2) is a limited-run, vinyl-only release of highlights from its fabled Halloween 2009 performance at the Tower Theater outside of Philadelphia. The show featured a long and varied set of impassioned, expertly executed Rolling Stones covers as only the Mule can deliver, with special guests Jackie Greene (Phil Lesh & Friends, Black Crowes, Trigger Hippy) and saxophonist Steve Elson (Stevie Ray Vaughan, Radiohead, David Bowie). The 2-LP with the Mule ripping through impassioned Rolling Stone covers is newly-edited and mastered.