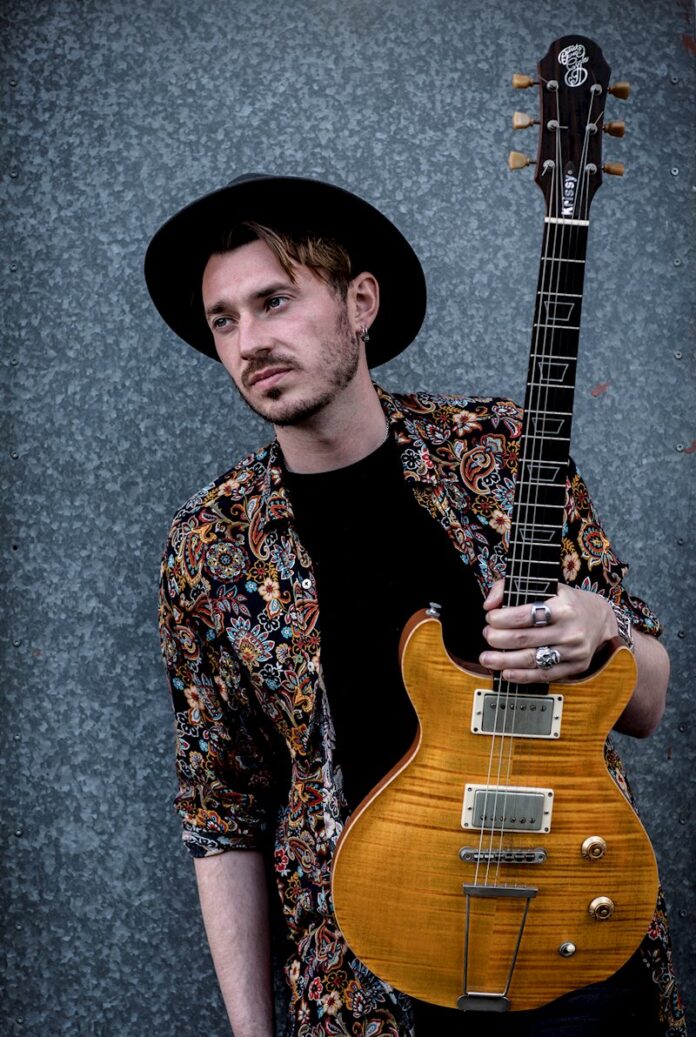 British-Norwegian guitarist and bandleader Krissy Matthews today releases a brand-new video for his single, ‘May Day’. Taken from his album ‘Pizza Man Blues’ (on Ruf Records), the video shows the band performing the track with much gusto, passion, and enjoyment,

“’Mayday’ is a song I wrote about the situation today in our planet,” explains Krissy, “This is a letter from Planet Earth to the Human Race asking for us to change our ways in order for our grandchildren and the children they have to have a planet to live on, thrive and enjoy. The music video that accompanies this song is clips from us playing it in the studio and trying to capture the vibe of how much fun we had in the studio making this song.”

Described as “one of the most promising artists on the blues-rock scene” by Cream lyricist Pete Brown, Krissy Matthews has been active as a guitarist from childhood. He’s honed his craft, learning from and performing with top-tier talent, like B.B. King. What’s more. He’s developed his own unique and distinctive sound and style. As Howlin’ Wolf’s fabled sideman, Hubert Sumlin, put it: “Oh boy, this kid can play…”

Krissy has built both a solo career, fronting the Krissy Matthews Band, and for the last 7 years he’s been a full-time featured member of legendary German outfit Hamburg Blues Band, alongside great singers such as Chris Farlowe, Arthur Brown and Maggie Bell.

The Krissy Matthews Band’s live show — featuring Felix Dehmel on Drums and Josh Rigal on Bass — has built a hell of a rep for taking the audience on a spectacular journey filled with fine songs, musicianship and great energy. The band has performed thousands of shows across the world, sharing the stage with stars of the likes of Toto, Graveyard, Joe Bonamassa, Gregg Allman, Tedeschi Trucks Band, Beth Hart and Joe Satriani.

Krissy signed to legendary German label Ruf Records last year and released his last album ‘Pizza Man Blues’, written during lockdown. The songs he laid down at Buckingham’s Echo Studios last September are inspired directly from the younger musician’s life and blur genres from rock, soul and blues to country, folk and indie.

“I wanted a ‘Krissy Matthews’ vibe to this album,” Krissy shrugs. “I don’t like to box myself into restrictions of where I can and can’t go, so I just write and see what happens. This was the result.”

“‘Pizza Man Blues’ is a snapshot of the moment those certainties were snatched away, with songs that tell of watching the life you knew torn down, then building it back and seeing things clearer as a result. “This last year, we’ve all had to adapt to circumstances,” he reflects. “I’ve been forced off the road, but I’ve tried to keep the engine alive, keep earning, not lose my passion. I’ve done so many jobs, like pizza and flower delivery driver, tree surgeon assistant, volunteering for the NHS. These songs are all about the experiences I’ve had.”

If you’re looking for fresh new blues-rock talent, with serious skills and musicianship with a unique style, check out Krissy Matthews and the video for  ‘May Day’ https://youtu.be/eFa9UPfYE0U