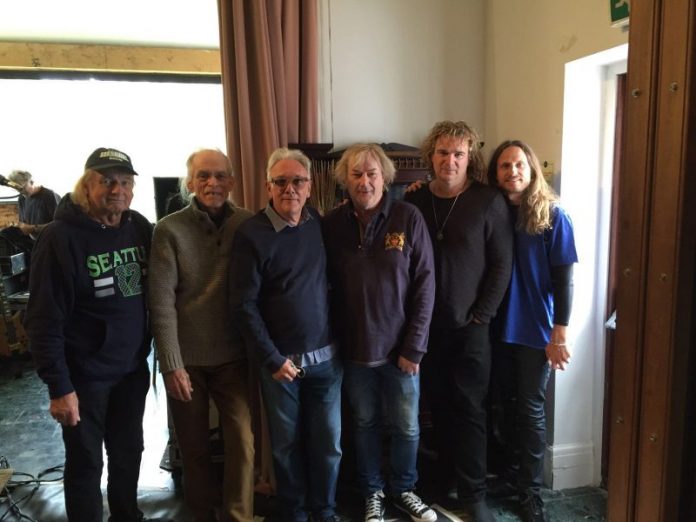 Trevor joins legends for a couple of shows

Trevor Horn has confirmed he will delight fans with a rare guest appearance during the band’s London show at Royal Albert Hall on 10th May. Trevor will also join YES on stage in Oxford on the 9th; this will be the first opportunity to see YES live with Trevor since the original Drama tour 36 years ago.

The announcement was made after Horn joined YES for a rehearsal session at Rockfield Studios in Monmouth last week; Robert Plant working also working in another studio at Rockfield also popped in to say hello to the guys.

The extensive UK and European tour sees YES performing 1980’s prog landmark album  ‘Drama’ in its entirety for the very first time, together with ‘Fragile’ 1971 and other seminal hits from their catalogue. ‘Drama’, YES’ only album to feature Horn as lead vocalist, marked a change of direction for their sound and was widely acclaimed by critics, reaching number 2 in the UK charts. The band disbanded after the tour, with Trevor venturing into production. Trevor Horn went onto produce YES’ next album 90125.

‘Most of the songs haven’t been performed in some 30 years’ – said Steve Howe. “Reliving those years will be very emotional” – adds drummer Alan White – “I know Chris would have loved to be here with us for this”.

YES was founded by Chris Squire and Jon Anderson in 1968. Characterised by a prog symphonic style of rock music, lengthy compositions and the use of mystical and cosmic lyrics, the band went on to record 21 albums and win several prestigious awards including Grammys, The band is recognized as one of the most influential icons in prog rock.

Still as relevant today as in the 70s, YES has maintained a loyal following while constantly attracting new crowds of music fans throughout 47 years of its outstanding career.

Dates for rest of EUROPE