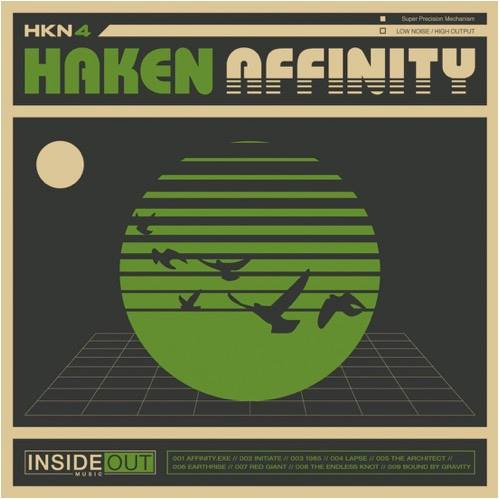 Even though, on their three previous efforts, you could never say that Haken had been tied to a particular style, even by those standards it feels like “Affinity” is an ambitious leap.

In the build up to the release of the record, singer Ross Jennings – who himself gives perhaps his most complete performance ever on these nine tracks – spoke about the band adopting a more collaborative approach than before. If they have, then it’s fair to say that the disparate influences have gelled to incredible effect.

From the proper opening song “Initiate” – the short instrumental title song officially gets us underway – it’s clear that this is an album of huge depth. On it, there are gorgeous harmonies, modern, taut guitar lines and a real interesting use of keyboards. That in reality sets the tone for the entire collection.

“1985” garners inspiration from the likes of Yes and Dream Theater and is absolutely unashamed to do so, “Lapse” is pulsing and widescreen “the universe is huge enough for us to hide” sings Jennings at one point, while “Earthrise” has a real uplifting feel and a monumental stadium filler of an opening riff.

Even on an album that cheerfully goes wherever it wants to, “Red Giant” is something of a surprise, with its stark, electro soundscape. On the other hand, “The Endless Knot”, which feels a lot more like a conventional prog metal track until it raves in the middle (at least we assume that’s what goes on a raves), still feels like it is a work of great importance, with its nihilistic verses and plaintive hook line of “we need a story to believe in, we need hero to prevail.”

The whole thing ends in dreamlike mode, with the fine piece “Bound By Gravity” with its piano and clever acoustic guitar. It allows the listener to float away and almost digest what has gone before.

“Affinity” has a very definite high-point, though. It comes in the middle in the shape of “The Architect” which is a near 16-minute journey through everything this magnificent record has to offer. At once it is Haken at their heaviest, their most psychedelic and their most left-field. It is an astonishing piece.

Even if that is the best thing here – the record as a whole – which again saw them work with Jens Bogren (Devin Townsend, BTBaM) is one to cherish and one of which the band can be rightly very proud It is perhaps the best of their career.