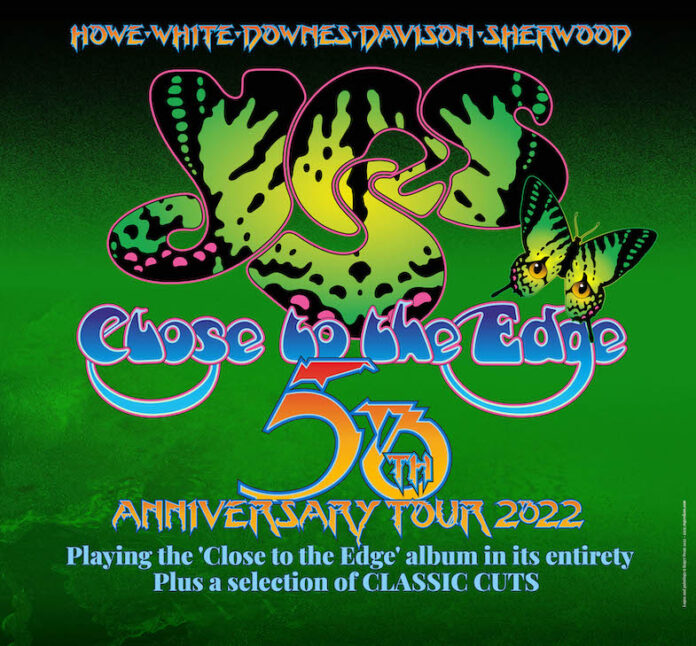 Progressive pioneers YES have announced a change to their forthcoming The Album Series Tour 2022 as they will celebrate the 50th anniversary of their iconic album Close to the Edge. This tour, twice rescheduled due to the Covid pandemic was intended to showcase YES’s 1974 classic Relayer album but will now feature Close to the Edge, performed in full, along with other classic tracks from YES’s extensive catalogue.  An announcement regarding the European dates will be made shortly.

The tour line-up features Steve Howe (guitars), Alan White (drums), Geoff Downes (keyboards), Jon Davison (vocals), Billy Sherwood (bass guitar and backing vocals) with additional drums and percussion by Jay Schellen. All tour dates are as previously announced and all tickets remain valid. A full performance of the Relayer album will now be featured in a future tour in The Album Series.

The show will comprise full production and a high-definition video wall directed by Roger Dean who will also be joining the tour with an exhibition of YES related art.

“We reached a real high, doing ‘Close to the Edge’,” said Steve Howe. “We valued the musicianship, the artistic ideas and the vocalising that people bring and that’s why we’re still doing it, because it’s exciting to do! ‘Close to the Edge’ was voted the most-proggy album possibly ever made. It was very experimental. We had already done 10-minute epics but with ‘Close to the Edge’ we just took it a stage further and I’m very pleased we were brave enough to do that.”

Tickets remain valid for the rescheduled shows. For full details and to book tickets for all shows go to venue website or http://yesworld.com/live where you can also book Meet and Greets with the band.

Formed in 1968 by Jon Anderson and the late, and much-missed, Chris Squire, YES have been one of the most innovative, influential and best-loved bands in rock music history. Their 1970s albums The Yes Album, Fragile, Close to the Edge, Yessongs (a triple live album set), Tales From Topographic Oceans, Relayer and Going For The One were ground-breaking in musical style and content. Their music also became synonymous with artist Roger Dean whose distinctive YES logo design and artwork adorned the lavish gatefold presentation sleeves of many YES albums.

With sales of over 50 million records, the Grammy-award winning YES were inducted into The Rock And Roll Hall Of Fame in 2017 where they performed Roundabout from the album Fragile and the FM radio-friendly Owner Of A Lonely Heart from the 1985 album 90125.  In 2021 YES released their 22nd Studio album, The Quest, produced by Steve Howe, which went to No.1 in the UK rock chart and entered the Official UK Album Chart at No. 20.