And it contains a Meat Loaf cover….

XANDRIA’s new EP is called Fire & Ashes and it is going to be released worldwide on July 31st via Napalm Records! Have a glance at the wonderful cover art, that was designed by Felipe Machado, known also for his works with Rage, Blind Guardian, Iron Savior and Rhapsody of Fire, to name a few.

There are three brand new songs on the EP, which are “Voyage of the Fallen”, “Unembraced” & “In Remembrance”. In addition to those tracks, the band decided to re-record two all time favorites ofXANDRIA’s fans, just the way they think the songs should sound like in 2015. These songs are: “Ravenheart” (originally recorded for the album Ravenheart in 2004) and  “Now & Forever” (India, 2005). 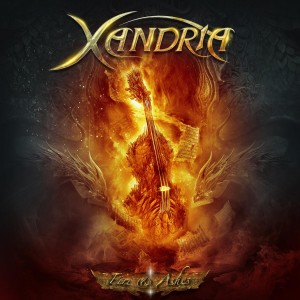 XANDRIA talked about recording select cover songs that might be included in this EP, the first one is Sonata Arctica’s classic “Don`t Say A Word” and as for the second, XANDRIA said the following:
“During the photoshoot for the Sacrificium record we were digging through our music libraries to find something appropriate for getting us in the right mood. At some point we got stuck with an artist every one of us had a crush on someone with and a story to tell about back then from our teenager days in the earlier 90ies. We straight away started joking about doing a XANDRIA version of this particular song, but really forgot about it until the discussion of doing some remake for an EP came up again. With the biggest respect we started this operation of transforming one of our all time faves, a real classic, into a XANDRIA hymn. Well, we think we quite did an “okay” job and on July the 31st it`s your turn to decide whether you`ve got a favorite song or not! “Fire & Ashes” will contain our intonation of Meat Loaf’s “I would do anything for love (but I won’t do that)”. This one is for you! Enjoy!”

Previous article
Thinking Jesus Is Just A Knife?
Next article
Kings Of The Castle