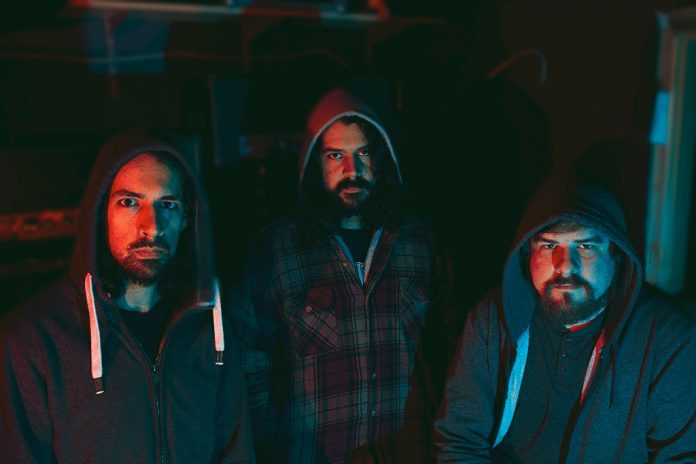 Sheffield trio AWOOGA have released new single and video ‘Temporal’, taken from their debut full-length, Conduit, set for release on 20 April via Rockosmos.

On both the song and video, Tam Ali (Bass / Vocals) comments:

“We tried to condense everything that Awooga loves into one song and video.  Joe Pesci’s vile character in Moonwalker starring Michael Jackson, Egyptians and mysterious pyramid shit.  And North Korean military rallies  –   Existence is imperative and short, and yet somehow eternal at the same time.  We tried to petrify that into 4 minutes of electricity.”

The band are currently on the road supporting Amplifier, check them out on one of the remaining dates:

The first single, ‘Waterhole’, was released last month. Check it out here: https://youtu.be/Jw5iVSQUglY

A culmination of a year’s work resulting in a deep, heavy, tranquil and visceral record, Conduit is set to establish AWOOGA as one of the UK’s most exciting and unique acts in 2018.

Following on from 2016’s debut Alpha EP, AWOOGA have further explored the boundaries of dismal sludge and euphoric space to create something that that is very much their own. Conduit is a vast soundscape that fills nearly every wave-length, touches on every emotion. It flows, it confuses, it’s conflicted and it’s beautiful. It is AWOOGA.

Inspiration from Frank Zappa, Alice in Chains and Tool is immediately apparent, AWOOGA also give a nod to Miles Davis, who was a champion of musical diversity and some of the world’s greatest artists.

Transition, change and progression are all fundamental themes of Conduit, and the recording process was very much a direct expression via the individual members’ performances.  Vocalist and bassist Tam Ali explains:

“In the exchange between the brain and the mind is the liminal place. This is where we reside. Brutality and Tranquillity. – All pass through the Conduit. The process of writing this album was extremely visceral, and direct flow of energy channelled out of the world and into a studio in the Galician mountains.”

AWOOGA have performed at festivals such as Crooked Ways, Tramlines festival supporting Anathema and KAYA festival with Asian Dub Foundation, an impressive feat for a band with only one EP released. This year will see them tour far and wide with many more headline and festival dates to follow.