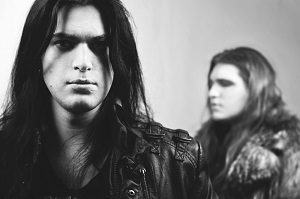 Woland warm up for new show

Woland are currently preparing for their gig at the Tuska Open Air Metal Festival Pre-Party!
Check out their debut album “Hyperion” here:

The music relies on a foundation without boundaries and a focused vision. When others crawl in the mud and idolise the past, the band gazes to the future with a Nietzschean vision and welcome it with opened arms. The core idea is to rise above one self and become one with divinity, to be everything you can be. While the music and lyrics are not tied to any specific events or follow any single dogma, they are heavily influenced by some of the modern worlds most prominent philosophers and writers as well as inspired by mythology with its gods and heroes.

Founded in the year 2010, Woland released a double single called “Conquer All & Live Forever” in February 2011 for the international event Finnish Metal Expo. While the songs have been freely streamable online, Woland concentrated on writing the full length album “Hyperion”, which is since completed and features elements from flamenco guitar to jazz piano, resulting in a unique and modern outcome. The album also features additional vocal performances from artists like Geir Bratland (Dimmu Borgir), Mathias ‘Vreth’ Lillmåns (Finntroll) and Janica Lönn (Black Sun Aeon).

The album was recorded by the band itself in their own studio, making it possible to experiment with newer production techniques and solutions that they can also incorporate to live settings. Along with audio production the band also has a strong visual aspect to the music that they flaunt in everything from design to performances. Woland is sharp, modern and full of contrasts. While black metal has been known as dirty and decayed, this is the flipside of the same coin.