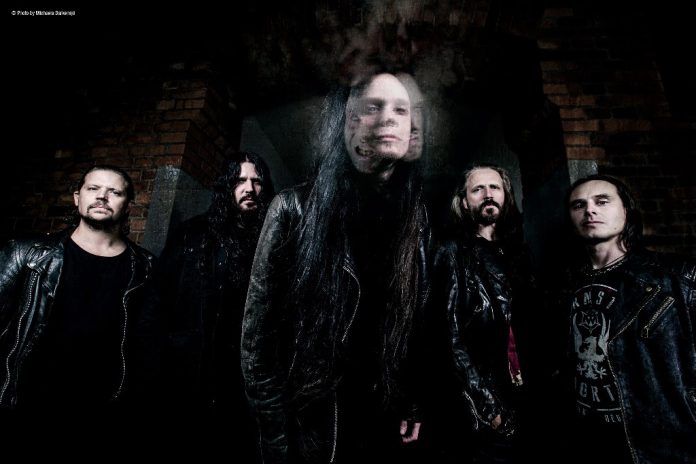 Metallers and their new single

Swedish blackened Metallers WITCHERY are gearing up for the release of their long-awaited 6th studio album, entitled ‘In His Infernal Majesty’s Service’ on November 25th, 2016 via Century Media Records.

The band have launched a lyric video for a first new track ‘Nosferatu’ – check out in the clip produced by Cloud Music Typography here:

WITCHERY’s guitarist and band-leader Jensen checked in as follows on ‘Nosferatu’: “This one is a mid-paced thrashy piece. Really fun to play. Lyrics are about extreme political ideas and movements that get momentum due to a “sleeping” majority”.

Here is the complete track-listing for the new album:

The album’s initial CD pressing comes as Digipak with 2 bonus tracks (‘Eye For An Eye’ and ‘Cloak And Dagger’, which are rare cuts from the ‘Witchkrieg’ album sessions), as Gatefold LP on 180gr. vinyl (On black as well as limited runs of 100x white, 100x golden and 200x red vinyl colouring!) and also as Digital Download.

The European pre-sale for the album will start on October 28th, 2016 via CM Distro: https://www.cmdistro.de

WITCHERY’s ‘In His Infernal Majesty’s Service’ was produced and mixed by Daniel Bergstrand at Dug Out Studio (Behemoth, In Flames, Meshuggah) and comes packaged in classy artwork by Andreas Diaz Pettersson.

In closing, Jensen added the following comment about the upcoming release: “We seriously can’t wait for this album to be released. It’s been far too long since “Witchkrieg” came out, and we want everyone to hear with their own ears that it’s been worth their while sticking around. That’s how good we feel this album is!”