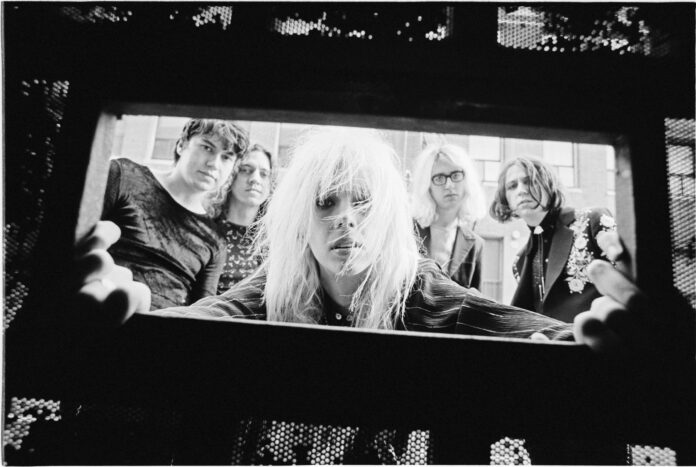 Starcrawler, the thrilling, LA-based rock’n’roll collective, have shared their brand-new track, “Roadkill” out today on Big Machine — their major label debut — available at all DSP’s.  Listen HERE.  Apple Music is prominently featuring the track on New Music Daily, with an accompanying interview with Zane Lowe on Apple Music 1.  With “Roadkill,” the band who PAPER aptly described as at “the intersection of 70’s-style glam rock and punk,” give audiences the first glimpse of their newly energized creative direction, complete with fierce, infectious guitar hooks and raw vocals to match.

The 5-piece, powerhouse band consists of full-throttle frontwoman Arrow De Wilde, guitarist Henri Cash and brother Bill Cash on pedal steel/guitar, drummer Seth Carolina, and bassist Tim Franco.   Co-written by De Wilde, Cash and Franco, “Roadkill” was produced by industry titan Tyler Bates. Starcrawler met Tyler when he was drafted into work with them on “Goodtime Girl,” a stand-alone single for DC’s Dark Nights: Death Metal soundtrack, which the band appeared on alongside the likes of Idles, Mastodon, and Chelsea Wolfe. “

Starcrawler have dropped a guttural, sonic bomb with “Roadkill,” and an equally powerful, lyrical punch.  The urgency of the track is felt immediately from the open, with Arrow’s ferocious vocals making a lasting impression. Her delivery oozes with infectious attitude throughout the track as she sneers, “You want mommy to hold your hand? You’ll be my Roadkill, Roadkill. Wrap you around my spinning wheel. Roadkill, Roadkill. Run you over see how it feels.” Speaking about the track, Arrow comments, “Roadkill is about anyone that tries to dig their heels in the ground and stand in your way. We’ve all had people try to tear us down, and sometimes you just have to run right through them.”

2022 sees Starcrawler return to the live stage for their dynamic live shows, described as “high-octane” by Vulture.  The band are currently playing for audiences around the globe at their own headline shows, as well as supporting the likes of Jack White in the U.S. and My Chemical Romance in the UK and Europe.  Next month they will perform in Sonoma, CA at the Huichica Music Fest on June 10th. Their wild and manic early live shows (almost mythologized now) led them to tour the world and play festivals such as Fuji Rock, Glastonbury, Primavera, Download and Reading and Leeds, as well as support slots with such notables as Beck, Cage the Elephant, The Distillers, Foo Fighters and the MC5.
UK LIVE DATES
MAY
Sun 22 – Milton Keynes, w/ My Chemical Romance
Thurs 26 – Colours, London, (headline)
Fri 27 – Victoria Park, Warrington, w/ My Chemical Romance
Sat 28 – Sophia Gardens, Cardiff, w/ My Chemical Romance
Sun 29 – Trades Hall, Hebden Bridge, (headline)
Mon 30 – OVO Hydro Glasgow, w/ My Chemical Romance
With two studio albums under their belt, Starcrawler’s upward trajectory continues to roll full steam ahead in 2022.  “Roadkill” is the first glimpse of their newly refined, bolder and bigger sound, with more new music on the horizon.     A modern day take on LA legends X, Starcrawler also have a sprinkle of The Go-Go’s, a smattering of The Distillers and some Rolling Stones sleaze thrown in for good measure.  In addition to their own sonic evolution, other ventures have included collaborations with rock legends like Tom Petty and the Heartbreakers’ guitarist Mike Campbell, as well as the late, great Taylor Hawkins and Perry Farrell. Featured on the famed UK program Later with Jools Holland, Arrow also made an arresting cameo in the video for recent Florence and the Machine single “My Love,” which was filmed in Kyiv, Ukraine at the end of 2021.   Starcrawler’s music can also be heard in unexpected places, most recently as the backdrop for a Nissan commercial and over the opening credits of the upcoming Jackass 4.5 series on Netflix.
For more on Starcrawler visit: FB / IG / TW / YT / TikTok / Website