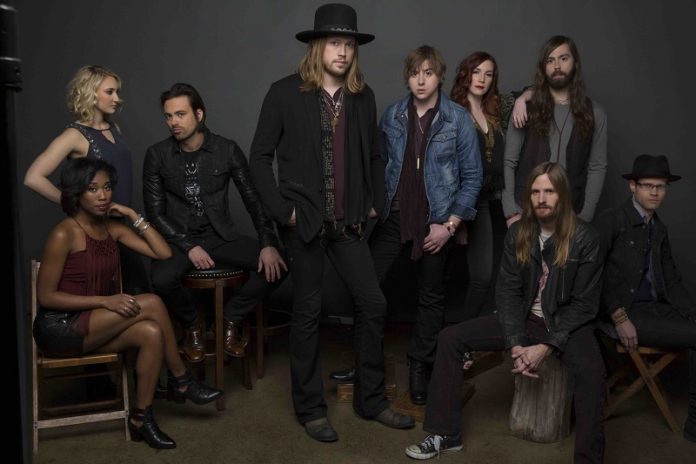 Your new favourite nine piece band in London next week

A Thousand Horses have announced their debut visit to the UK with a performance at C2C, the UK’s biggest country music festival, at the O2 Arena alongside an intimate headline show at The Barfly in Camden, London.

The band recently revealed the video for their latest single ‘First Time’. C-Listed at Radio2, the track is an effortless union of southern rock with an anthemic soulful vibe throughout that mixes Black Crowes-style groove with undeniable swagger. The video features a montage of footage taken from their smash hit US tour when the band hit the road as a nine-piece complete with three backing singers, a fiddle and a keyboard player.

That very same nine-piece will be bringing their thundering sound to London where they will be performing at The Brooklyn Bowl in The O2 as part of the C2C festival alongside Carrie Underwood, Miranda Lambert, Dwight Yoakam, Little Big Town, Kacey Musgroves, Eric Church, Striking Matches and many more.
“Since we were kids we have dreamt of performing in the UK and to finally make it happen is a dream come true” says DeLoach. “The Beatles, Oasis and Led Zeppelin are some of our favorite bands. We are super stoked to come play in the UK” concludes Satcher.

The band have been nominated for the Academy of Country Music Award for New Vocal Duo or Group of the Year and were hotly tipped by Rolling Stone Country and USA Today for their soaring ballad ‘Smoke’, which saw them become the first band to have a debut single reach #1 on the Billboard Country Airplay Chart this decade while its video received a nomination at the CMT Music Awards.

Taking the finest from their influences they have created a fresh fusion of classic sounds – a hybrid of Lynyrd Skynyrd, the Allman Brothers, Black Crowes and Exile on Main Street-era Rolling Stones – wrapped up in a modern-country context.